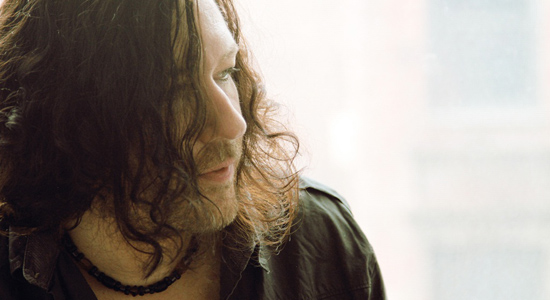 It’s tricky for a musician who started as young as Ed Hale to be seen as anything other than the 17-year-old “Eddie Darling.” But impressively, Hale has made a name for himself with his various outings over the years, the most recent being Ed Hale And The Transcendence, which just released All Your Heroes Become Villains (Dying Van Gogh). With this band, Hale has pioneered the idea of “planetary music”: a combination of modern-rock aesthetics and world-music sounds. In his own solo career, his output is still deeply personal, but it focuses more on the acoustic instead of his sonorous and genre-spanning songs with the Transcendence. Also an activist, writer and businessman, Hale is a man with many talents, all of which influence his inspired sound. Hale made this awesome mix tape below for MAGNET.

Lou Reed “Street Hassle”
I placed this first because out of all the songs that have ever been recorded in modern pop/rock history, it still stands as one of the most unique and innovative of all time. I still listen to it and just don’t get how Lou managed to pull it off. Three separate parts all tied together, but not like a concept album or anything. To me as an artist, innovating is still really important. And that’s why I dig Lou so much. He’s always reaching for something new. Video

Laurie Anderson “O Superman”
First time I heard this song I was in college. I couldn’t understand what I was hearing. Running both her electric violin and voice through numerous harmonizers to create a sound that we had never heard before. But, that’s not enough. She wasn’t just innovating. This song also happens to be beautiful. We have to give her props for how far she’s pushed the envelope for us all. Video

Phoenix United
I know I’m cheating a little here because this is an album rather than just a song, but United is one of those records that’s like a “treasured little secret” among people who know it. They recorded this album back in 1999, long before the ’80s New Wave Revival got kicking here in the States. Because of that, Phoenix remained an unknown band for years because they were so far ahead of the curve. But for people who love super-catchy West Coast breezy pop, buy this album. Video

The Strokes “Someday”
The Strokes released their now-classic Is This It album in 2001. I started turning on to the Strokes like everybody else, and they just grabbed me. Now I can’t imagine a world without them. This whole first album is filled with awesome songs. The distorted vocals, the melodic guitar lines, the bouncy pop rhythms, the fuck-it-all attitude. They’re just very appealing, and this song is one of my favorites on the album. Video

T.Rex “Spaceball Ricochet”
There are 100 songs that I could list that Marc Bolan wrote that are great. He nailed one of the sexiest male rock singer voices of all time, and nowhere did he do it better than on his two biggest selling albums, The Slider and Electric Warrior. I discovered Bolan when I was a kid, but all of his work had a huge influence on me. He had already passed away, but then later on I learned that he was also a huge influence on David Bowie and Bono and a lot of other people, so it all makes sense in the big picture. Video

Fleet Foxes “Helplessness Blues”
This may seem the “politically correct” choice of the moment, because everyone in the world is currently talking about Fleet Foxes right now, but there’s a reason for that. Like every other song on this list, “Helplessness Blues” is one of those songs that from the very first moment that you hear it, you find yourself asking, “Who the hell is this?!” More than anything, that’s what we’re all aiming at as artists. They recorded this album less than a mile from my house in Washington state, and they deserve as much “ink” as they can get. Video

David Bowie “Sweet Thing/Candidate/Sweet Thing (Reprise)”
These three songs are all tied together on Bowie’s Diamond Dogs album. Bowie is a huge influence on me as an artist, and Diamond Dogs was Bowie’s best Ziggy album as far as I’m concerned. It was also his darkest. Anyone who likes anything from Bowie should buy this album. Diamond Dogs was full-on concept, from the artwork to the way all the songs were tied together lyrically and musically. Without that album, I don’t think we’d be doing this mix tape. There’d be no All Your Heroes Become Villains. Video

Caetano Veloso And Gilberto Gil “Desde De Que Samba E Samba”
This is a very hip, laid-back bossa-nova song by Caetano and Gilberto. The reason I chose this one for you is because of the profound effect this song and this album had on me as a musician. I was living in Brazil for the summer, studying the language of Portuguese and learning how to play bossa-nova guitar. Brazilian people live through their music, and the samba is their life. It pulses through their veins. It’s not just “a dance” or a style of music. It’s a whole culture. If you dig the song, try to find someone to translate the lyrics for you. They are very moving and intelligent. Caetano is a God. Video

Bruce Springsteen “Backstreets”
I still remember sitting on the floor of my bedroom with this album in my hand, Born To Run, and listening to this particular song over and over again. I chose this song for you all because of its seething passion. The way he hits those high notes in the chorus. This song is so damn real and sincere and passionate and emotional. Bruce was just letting it all hang out emotionally in this tune; he killed it. In the process, he became “The Boss,” and I think it’s a well deserved title. Video

Bob Dylan “It’s Alright Ma I’m Only Bleeding”
How the hell do you choose just one Dylan song for a mix tape? Well, obviously, you’re gonna want to buy the whole Blood On The Tracks album. But where’s that one nugget of brilliance? It’s this one, man. Grab the lyrics, put the needle down and listen to it. The falling chords beneath the melody are deceptively simple and yet eerie as all hell. Foreboding. And then there are the lyrics. This idea that “he not busy being born is busy dying”—that’s Bob. He said that. That’s why he’s Bob Dylan. Video