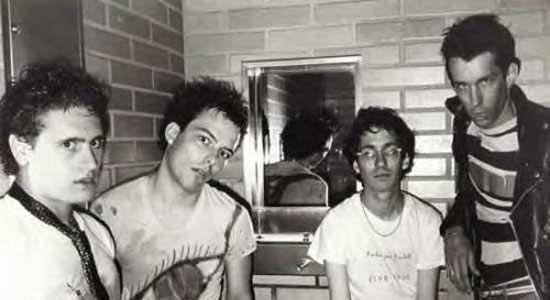 Arguably the most interesting band of hardcore’s early days, the Dead Kennedys had perfected their sound and scope on 1980 debut full-length, Fresh Fruit For Rotting Vegetables. Over the next few years, they would fill their more abrasive songs with even more experimental sounds, political satire and Jello Biafra’s cartoonish vocals to create the right amount of solemnity and fun. After the release of 1982’s Plastic Surgery Disasters, DK continued to tour the world, racking up more fans than ever, though they put their studio recording on hold to focus on their label, Alternative Tentacles. When the band finally did release its next album, the LP would simultaneously become its most (in)famous and the most challenging work of its career.

For a band that didn’t jam too often, a few of Frankenchrist’s best songs started that way, including opener “Soup Is Good Food.” Over the band’s slanted grooves, guitarist East Bay Ray twists and turns in one of his weirdest moments. Lyrically, the song deals with the working man, which the company bosses view as faceless, expendable drones—“We’re sorry, but you’re no longer needed, or wanted, or even cared about here.” Eventually, the workers are replaced with machines, then “ground into sludge and flushed away.” Later on the album, the Ray-penned “At My Job” follows up on this theme, but musically the sound is much different. Gone is the twisted Latin beat, replaced with a cold, synthy industrial wasteland, reminiscent of its subject matter.

Another song to come out of the Kennedys jam sessions, “This Could Be Anywhere (This Could Be Everywhere)” features more of Ray’s eerie guitar work and even more stark subject matter. Describing an American landscape who’s “culture slum suburbia is a war zone now,” Biafra warns of the depression and madness that can creep into anyone’s life, turning fathers into crazed vigilantes, and the hateful children who wish to grow up to be just like them.

While “This Could Be Anywhere” focuses on the home life of suburban kids, “Jock- O-Rama (Invasion Of The Beef Patrol)” describes their school and social lives, which are not much better. The lyrics criticize the school systems who praise the football-playing “Beef Patrol,” who “walk tough, don’t act too smart,” and how, according to the band, “the future of America is in their hands.” In the song’s darkly funny middle section, after the coach tells his high-school football team to “get out there and snap the other guy’s knee,” the star quarterback is injured on field; he’s first praised for his efforts, though quickly forgotten about as his classmates are given a free pass to go drink and drive around town. (Perhaps the band had a point—as I write this, the top sports news story in the country involves the NFL’s “bounties,” as the New Orleans Saints have admitted to paying bonuses to players who brutally injure members of the other team.)

The highlight of Frankenchrist is “Stars And Stripes Of Corruption,” the album’s longest and most important song. As Jello visits our nation’s capital, he compares the Washington Monument to a “great eternal Klansman,” shaming our politicians who cash in our future by taking bribe after bribe. The song touches on handpicked dictators, homelessness, war, xenophobia and blind jingoism, among other topics—boiling down everything DK stood for in one song. The band is in full force with Ray’s anthemic chords, Klaus Fluoride and D.H. Peligro’s driving rhythm section and one of the best vocal performances of Biafra’s career. As he explains that people can only start changing from the inside, his anger and glee explode as once as he hits the line, “You know it feels good to lift that monkey off our backs!”

Although “Stars And Stripes Of Corruption” would close the album, one particular line of the song would soon become very prophetic soon after its release—“I’m thankful I live in a place where I can say the things I do without being taken out and shot, so I’m on guard against the goons, trying to take my rights away.” In most of the Hidden Gems columns, the album in question is released to mild acclaim, and then overlooked for whatever reason. Frankenchrist is a noteworthy addition because that is not the case; in fact, the record had one of the wildest reactions in the history of rock ‘n’ roll, becoming news all over the world.

As you may have guessed from reading some of their lyrics, the Dead Kennedys didn’t exactly have a lot of friends in Washington, becoming targets of the Parents Music Resource Center (PMRC). At the time of its release in late ’85, the PMRC, a group of “Washington wives” including Tipper Gore, had lobbied for stricter censorship among the music industry, attempting for record companies to put warning labels on albums that they considered offensive. This led to a legendary senate hearing in August of that year, featuring the opposing testimony of Dee Snider of Twisted Sister, John Denver and Frank Zappa, who all fought for an artist’s right to free speech, arguing that rock music was being used as a scapegoat for all of America’s problems and fears.

On April 15, 1986, nine police officers raided the home of Biafra, as well as Alternative Tentacles’ headquarters, searching for “harmful matter.” Biafra was confused to what “harmful matter” they were looking for, as the police found no drugs or guns on the premises, though he soon learned they were referring to copies of Frankenchrist. Although the album’s cover features a harmless picture of old Shriners in motor carts, it also featured an inserted poster of a painting by legendary artist H.R. Giger, entitled Work 219: Landscape XX. The painting features a number of erect penises entering vaginas, which Biafra viewed as a depiction of “people screwing each other over,” echoing the album’s sentiments.

Two months later, Biafra and four others who were involved in the album’s distribution were charged with “distributing harmful matter to minors,” which could lead to a year in jail, after receiving a complaint from a mother whose 13-year-old daughter had purchased the album at a Wherehouse Records. (The record chain was not charged, as it agreed to stop the sales of all Dead Kennedys albums, even though it was the one that actually distributed “harmful matter” to a minor.) 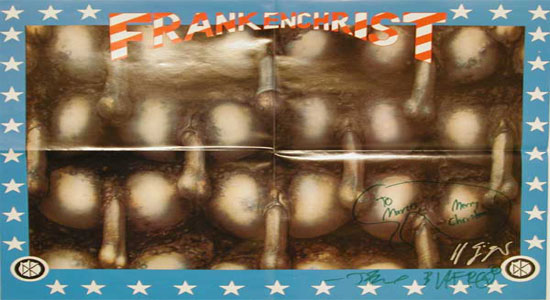 It was later revealed that the Dead Kennedys album was chosen because it was released on an independent label, one that could be put out of business by being sued, thus teaching a lesson to other labels to better censor themselves or suffer the same fate. Thankfully, Alternative Tentacles decided to fight the case, founding the No More Censorship Defense Fund to raise money for legal fees, receiving donations around the world from fans and non-fans alike—people who strongly disagreed with the case on moral grounds, including Zappa. Eventually, the charges of three members of the distribution team were dropped due to lack of evidence, but the ones against Biafra and Michael Bonanno, former Alternative Tentacles manager, remained.

Although the prosecutors argued that the album’s music and lyrics should not be submitted as evidence in the case, the judge disagreed, leading to the defendants to prove that the artwork was an artistic extension of Frankenchrist’s themes, and not pornography. In August 1987, the trial ended due to a hung jury, which was deadlocked seven to five in favor of acquittal. The case was a victory for artists everywhere, though it was not without its sacrifices. On a personal level, Biafra’s marriage fell apart around this time as the trial deeply took its toll; Alternative Tentacles almost went bankrupt due to legal fees and suffered low sales due to stores afraid to carry its products; lastly, the Dead Kennedys split up after recording one more hit-or-miss album, Bedtime For Democracy.

Although Frankenchrist became DK’s most well-known album, it’s because of the backstory and aftermath, not its music. This is to be expected, as the court case is one of the most famous in all of rock music, but unfortunate nonetheless, since it contains some of the band’s best songs. If nothing else, the album and ensuing controversy only prove that the Dead Kennedys were true artists, risking everything they had for what they believe in. The saddest part, however, is not that it forced to band to break up, nor is it the emotional toll it took on its members. The most depressing part about Frankenchrist is that through all the eye-opening topics and important ideals discussed on the album—from unnecessary war, evil dictatorships, racism and blind hatred—the only thing people were truly upset by was a painting.

Always been blown away by those pristine lyrics. However , frustrated tendencies, re: because they are THE Dead Kennedys,… , brilliant words remain un-harvested , by the very demographic that could use them….bloody shame !! Then again I suppose diamonds ARE hidden deep, not simply scattered on the surface.