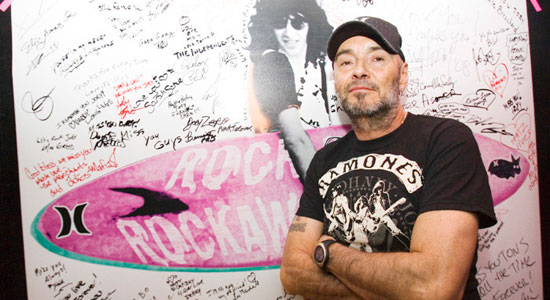 Kinney: Every band has, or had, an Arturo Vega.
Someone to champion the band through its early days
not quite a manager, or an A&R, or producer
but kind of all of them as well
The inside friend
ambassador
peacemaker
soldier
artist
confidant
road warrior
I feel safe to say
without Arturo Vega you would not have the Ramones as you know them
today
I was, I am sure,
like a lot of Ramone fans
Embraced by the warm smile
of this Latin rock n’ roll
conquistador.
A man of no bullshit
and for the last 30-some years
always made me feel welcome
into the world of the
greatest rock ‘n’ roll band …
I will never forget
standing at the light board
some local DJ takes the stage
ladies and gentleman …
The Ramones!
Lights go down
logo up lit
the PA thunders the opening riff
of “The Good, The Bad And The Ugly”
and the silhouettes of the band
take the stage through a field of fists in the air
Dee Dee
1234
Pow!
What the … ?!
And I stand there and look at Arturo
flashing the lights to the backbeat and full-frontal assault
and think to myself
man … This is the guy
He knows them
they lived with him
he designed one of the worlds most iconic logos
and after the show he will be at the merch booth
to sell you one
and someday everybody in the whole fuckin’ world will wear one
but tomorrow at John Marshall High
it will only be me … And Clancy Carrol
and few else in this whole school will ever even hear of them
I can’t wait to start a band
I think to myself
as I stare out the window
in daydream …
I think that’s how it began for a thousand others
Thank You
Arturo Vega
for letting me push the merch road case
through the desert of broken beer bottles and plastic cups
and for five minutes feel like part of the crew
and the coolest guy in Milwaukee Wisconsin …
The Ramones have left the building
But their Svengali still lives on Joey Ramone Way
New York City