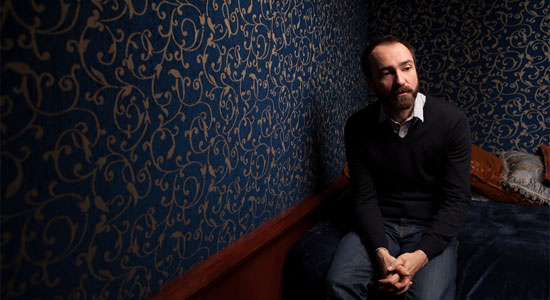 Issue #86, which hits mailboxes and newsstands this week, features the Shins on the cover and an in-depth 5,500-word feature by MAGNET’s Jonathan Valania on James Mercer. To mark the occasion, we’re posting this interview segment where we asked Mercer to go through the new Port Of Morrow song by song. Here’s what he had to say:

“The Rifle’s Spiral”
“The song is written from the perspective of somebody funding and paying for suicide bombers to engage in that horrible activity. Just the perverse and grotesque thing that that is, and you know, living in the age we live in and my disrespect and fear of religion in general just fueling that intense hatred and appalling violence.”

“Simple Song”
“‘Simple Song’ is the love song. I mean, it’s that feeling that I’ve gained a lot of confidence, and a lot of it is because of my wife and the strength that she gives me. That strength that you get from a real strong love.”

“It’s Only Life”
“When you’ve got that friend who is depressed and bummed and you just want to shake them out of it and be like, ‘Come on, isn’t there anything that you can grab on to that you can enjoy?’ Something I wish that somebody would’ve asked me that question at certain points in my life, you know?”

“Bait And Switch”
“It’s about this hapless man who’s fallen for a girl who’s just way too much for him to handle. Which is such a fucking comic and common thing to have happen, you know; you’ve seen it probably happen with your friends. The guy who ends up dating the stripper, or whatever, and like it’s just classic. Lyrically, it’s sympathetic to this guy who’s just sucked into something; he’s out of his league with his sexual attraction for this woman and her ability to manipulate him, and so on.”

“September”
“A working title that stuck, which happens sometimes. September happens to be the month that I first saw (wife) Marisa. I didn’t actually meet her until months later when she came to interview me for Spin. I realized that I had seen her in the audience [at Irving Plaza during the Chutes Too Narrow tour], which is weird—for me to have that moment, especially without my glasses on. But she’s tall and she’s distinctive looking, and she was with somebody who looked a lot like her but was shorter. That’s what I told her when we met, and she was like, ‘I was with my younger sister.’ So we hit it off and never really looked back, and she decided it would be unethical to do the story.”

“No Way Down”
“I read an article—I forget where, exactly—but it was just basically about how in the United States we used to manufacture a lot of stuff, like a lot of the microphones that I buy on eBay because they’re good, high-quality microphones, but they’re old. Nobody makes them anymore because we don’t make anything, basically. So it was about that issue, and it was about the argument that they were making. It was that big-money interests that lobbied to have free trade with Asia. So we were able to buy goods made in countries that had no respect for civil rights, and the relationships with the unions [in this country] could finally be skirted around and we could end that. So now we’re in the situation today where you cannot make a living, basically. We used to make every fucking thing we used, and we lost all that. Fucked the country, saved their asses, fucked the whole economy.”

“For A Fool”
“I think of it as a country-western song. In writing that I remember thinking about old relationships with … it’s one of those songs where it’s about a lot of different people and a lot of different situations in my life, but I wrote it to sound like a man talking about his lost love or something. Some woman who ran around on him and schooled his ass. That’s the one I’m hoping somebody someday will cover. Hopefully Dwight Yoakam.”

“Fall Of ’82”
“When I was 11, we moved from Germany to New Mexico, resulting in long period of anxiety and stress that triggered some change in my brain chemistry. I became forlorn and morose for six months. I was pulled out of this funk by my oldest sister who had moved back in with the family. She was about 22; she had moved to Kansas and had some affair with a local yokel and that fell apart, so she moved back. She had been kind of a hood back in high school. I remember looking at pictures of here from back then, and there was this kind of a cute girl wearing a denim jacket with shit written on it. But she didn’t get into the drugs like my older brother did. So she was just this combo of motherly and cool, and it was the perfect presence to be around. And she knew the weirdness of adolescence it was still fresh in her mind. I am eternally grateful.”

“40 Mark Strasse”
“When I was a kid and we were living in Germany, I used to go with my dad when he sang in nightclubs. We couldn’t afford a babysitter every night, so I would go with my parents to the nightclub and stay until two in the morning and fall asleep in a booth. We would drive back to Rammstein Air Force Base, and along that route is this stretch called 40 Mark Strasse, named so by the G.I.s on the base. Because it’s where you can go get a hooker for 40 marks. Which was $20 at the time, in the ‘80s. I mean I had sexual feelings toward girls, but when you’re nine and stuff you don’t. I just knew it was like adult shit that was sketchy. But the girls seemed very young; they looked like high-school-age girls, shivering in bus shelters in short shorts in the cold. The theme in this song is that there’s this young German kid who lives in the apartment building where one of these girls lives and he’s infatuated with her. So off she goes at night, and he doesn’t know what the fuck she’s doing.”

“Port Of Morrow”
“Port Of Morrow is the sign on the side of the road when you come back to Oregon from being on tour. You head west into Oregon, and Port Of Morrow is one of the things where you get like, ‘Oh my god, we’re almost home!’ It’s right on the Columbia River, which is what separates Oregon from Washington state. That made me think of the River Styx, and I thought of death. Like we’ll all be dead eventually. So the song sort is sort of a summing up of this whole idea that life is at once beautiful and grotesque, and we live in a state of ignorance and a state of terror. You know, like you live moment to moment and you’re eating your food and going about your business, and looming nearby is the Port Of Morrow—this eventual fate.”

2 replies on “MAGNET Web Exclusive: The Shins’ James Mercer On The New “Port Of Morrow””

[…] BY JONATHAN VALANIA James Mercer’s Rosebud is a beat-to-shit acoustic guitar he bought 10 years ago in a thrift store for the princely sum of $3. When he got it home he took out a Sharpie and scrawled the words YOU WILL BE DEAD across the top a la that iconic photo of Woodie Guthrie holding up guitar with the words THIS MACHINE KILLS FASCISTS written on it. Like all good Rosebuds, it’s hard to find. To get to it you have to go to his home, located in a secure undisclosed location in Portland, unlock the high fence gate that rings the grassy knoll of his front yard, say hello to his lovely wife who is weeding the flower beds that hug the contours of the front porch of the 120-year-old Queen Anne house he bought four years ago, hear around back past the two towering Doug Firs in his back yard, past the rode-hard-put-up-wet maroon ’89 Ford Shins touring van that Mercer holds onto for sentimental reasons despite 300,000 of wear and tear, cross the wide circular driveway that takes up most of his expansive back yard, go past the wishing well and into the once-dilapidated carriage house that’s been restored and converted into a recording studio-cum-guest house (you can see it in the new “Bait And Switch” video), climb the circular stairs to the second floor, turn to your right once you get to the top and you will see it leaning against the wall. […]

[…] The Shins – The Rifle’s Spiral. Love the song, but kinda crazy what meaning and inspiration behind the song was: https://magnetmagazine.com/2012/03/26/magnet-web-exclusive-the-shins-james-mercer-on-the-new-port&#8230; […]