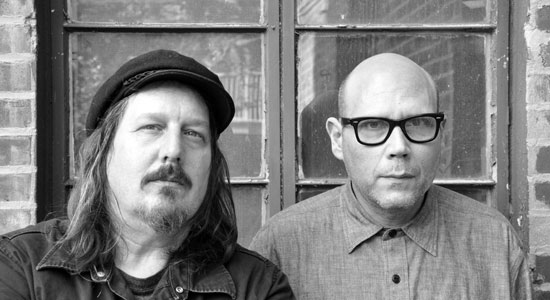 Kevn Kinney‘s music has always been lurking in the cobwebbed corners of your mind, even if you weren’t aware of it. After making the big move from Milwaukee to Atlanta back in the ’80s, he happened to be close to Athens, Ga., the birthplace of R.E.M., when that band was really catching fire. He caught the always-open ear of Peter Buck, who produced some material by Kinney’s band, Drivin N Cryin, which would latch onto a support slot for an R.E.M. tour. Fast forward to the new millennium, and Kinney has moved to Brooklyn, where he’s cut a fine solo record, A Good Country Mile, with Anton Fier and the Golden Palominos. The new disc somehow manages to fit Bob Dylan, Lynyrd Skynyrd and Van Morrison under the same tiny leopard-skin pill-box hat. Kinney spoke to MAGNET from the East River Ferry. He will also be guest editing magnetmagazine.com all week.

MAGNET: I can hear water rushing below you. Was that Kramer swimming in the East River or just another floating stiff?
Kinney: I have very spotty phone coverage. I may have to climb a pole, like in Green Acres. I can see the Empire State Building from here.

You were raised in Milwaukee, not too far from Hüsker Dü and the Replacements, and then moved to Atlanta. Was that a shock to the nervous system?
Yeah, I was in Milwaukee until I was 20. I watched Macon County Line the night before I left. But moving to Atlanta wasn’t as bad as I might have thought. I moved down there with a couple of my friends, a gay couple. So, immediately, Atlanta was this never-ending disco, rock ‘n’ roll kinda thing. It wasn’t anything like I thought it would be. It wasn’t all chitlings and corn bread. The thing about Atlanta back then was they had jobs. My brother called and told me they had a lot of construction jobs down there. I was an apprentice form-builder, built a lot of sewage-treatment plants. I put the re-bar in the forms, a lot of concrete work. I haven’t done any of that for 25 years. Once I got into the music biz and made a hundred dollars for a show, I was like, “Woo hoo.”

I saw Drivin N Cryin play twice, at the Oasis in San Jose in 1988, and I saw you open for Neil Young & Crazy Horse and Sonic Youth at the Cow Palace in San Francisco in 1991.
I think that was our first or second show on that tour. The band we took the place of was Social Distortion, who had just quit the tour. We were the replacement act. We were excited: free tickets to see Neil Young. By then, it was just the West Coast. By the end of the tour we played Seattle, and they were making Singles, this grunge movie with Matt Dillon.

When I think of Drivin N Cryin, I always think of Guadalcanal Diary also, as opening acts for R.E.M. Did you play with those guys much?
Guadalcanal was from Athens, so we opened for them at our first big record-release show in ’87. And we did the New Music Seminar in New York City with them. We opened the Green tour for R.E.M., the Northeast quadrant, from Maine to Miami. Peter Buck was our first fan in Athens. He produced some demos for us. He wanted to produce our first major-label album, but our A&R person didn’t think he was seasoned enough. We just did a series of shows with Peter down in Mexico, in Todos Santos, 50 miles north of Cabo San Lucas in Baja, Calif. The first week was Peter with Steve Wynn and the Baseball Project. Then it was Peter with Robyn Hitchcock, and then it was Peter with Scott McCaughey and Minus 5. And finally it was Peter with me and Chuck Prophet. We played at the Hotel California.

Wow, where you check in but you don’t check out. Or is that the Roach Motel?
It was amazing. You should come down next year. And it’s perfectly safe.

Yeah, that is a problem with some parts of Mexico. Maybe you could hide, but I imagine Baja is just about impossible to escape from.
There’s not really any place to hide. It’s mostly desert.

Tell me something about your solo stuff. Love the new album with the Golden Palominos. It has some of that Southern-rock kind of thing going on.
I’ve been working on that for about a year. It was produced by Anton Fier, the drummer for the Feelies and he played with John Lurie’s band, the Lounge Lizards, those guys who wore suits and ties. Anton’s main thing was the Golden Palominos.

The opening track for your new album, with these lush chords, I half-expected to hear one of my favorite singers ever step into the spotlight, Sal Valentino of the Beau Brummels. Have you ever heard of him?
Wow, yeah, that was one of my key bands, one of favorite bands ever. They did something called “Cry Just A Little.” I bought both those first two Beau Brummels records at the Goodwill store. They were amazing. You don’t hear people referencing the Beau Brummels a lot, as influences. Did they come before Byrds, or what?

Yep, they had two hits in 1964, doing folk/rock before the Byrds released “Mr. Tambourine Man.” I think they inspired the Byrds.
And they have the honor of being on an episode of The Flintstones.

Hey, before I forget, I have to ask you about the unique spelling of your first name. Did you always spell it that way, with only one vowel?
I did not. I used to do these paintings, these crazy watercolors, and I would sign with just my first name. But the “I” always looked like I was still in eighth grade. At that time, the gas company sent me a bill without the “I” in my first name. And that looked cool. So I decided to leave it like that.

Yeah, good for you. I talked to Andy Shernoff recently from the Dictators.
Oh sure, Andy’s my neighbor here in Brooklyn, one of my best friends. He lives just two streets over. Keith Streng from the Fleshtones, we’re all in the same neighborhood.

Wow, small world! Andy told me when he was writing for Creem magazine, 40 years ago, someone typoed his first name as “Adny.” And he kept it that way just to make his record reviews stood out.
I know. Andy just played “I Stand Tall,” a Dictators song, for my wife’s birthday party.

I hear just a wee bit of Lynyrd Skynyrd in your music, the Southern-rock thing, which I always liked, the Allman Brothers.
Well I lived down there for 25 years, and I still perform down there. The South has some really great musicians. For one thing, there’s a lot more space down there, so it’s easier to practice. In the South, it’s more like joining a family when you play in a band. You have a house you practice in. In New York, you have to rent a practice space and share it with three other bands. In New York, you get a slot, but in the South you’re supposed to play for three or four hours a night. I’m really good friends with Warren Haynes from the Allman Brothers. I had never heard much Allman Brothers or Skynyrd until I moved down South. But when you’re sitting out on the porch on a warm summer night, just a little bit tipsy, the Allman Brothers really make a lot more sense.

4 replies on “Q&A With Kevn Kinney”

Nice piece, Kevn. I’m finally back in AtL. I’ll come see you next time you are in town.
Mike Hendry

Great shows in Rome, we hope to see more. Seeing Kevn and Audley is the best!!

Love this line: “But when you’re sitting out on the porch on a warm summer night, just a little bit tipsy, the Allman Brothers really make a lot more sense.”

True dat. Had a big time a the recent DNC show in Baton Rouge. Looking forward to KK and Todd Snider in Dallas 5/2 – rock on!