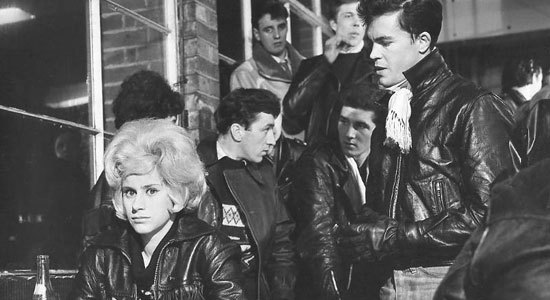 As a home-economics teacher drones on about laundry soap, Dot glances out the window, looking for Reg. “There he is,” whispers a classmate as a motorcycle pulls up next to the sidewalk. Another girl asks Dot anxiously, “Has he got the ring?” “I’ll clock him one if he hasn’t,” says Dot (Rita Tushingham) as she and her friends rush outside. “Watch your eyes, girls. It’s gonna dazzle ya,” warns Reg Wilcox (Colin Campbell) wearing a leather jacket with the word “Dodgy” on the back, as he opens a tiny box before an eager crowd.

At the reception after Reg and Dot’s wedding, Uncle Arthur (Martin Matthews) buys drinks for the bride and groom. “I’ll have a beer,” says Reg, already half-gassed. “Ah, beer makes you queer,” giggles Arthur. When Dot orders a whiskey, Arthur wags a finger, “Whiskey makes you frisky.” Arthur’s toast is equally risqué: “Please join me in hoping that all their troubles will be little ones.” The newlyweds are last seen dancing to an instrumental that sounds like “What Kind Of Fool Am I?”

By the time the happy couple has motorcycled down to Butlin’s Holiday Camp in the coastal town of Bognor Regis, it’s raining hard. After too much time spent in bed, Dot wants to go dancing. Reg sulks and heads back to their chalet when someone else asks Dot to dance. The next day, she gets her hair ratted high and dyed, twice. “They did it pink champagne instead of pink platinum,” says Dot. Reg prefers it dark brown.

His work as an auto mechanic back in London has taken its toll on Reg’s libido. “I’m hungry when I come home,” he barks at Dot who would rather spend time at the pictures than do housework. Angry, Reg roars off to the Ace Cafe where he meets Pete (Dudley Sutton). “Columbus went to America on something newer than that,” laughs Pete, pointing at Reg’s vintage Norton. They take their bikes out to the rubbish dump where Pete works, to swill beer and shoot off fireworks. When Reg leaves Dot, he and Pete move upstairs at Reg’s grandmother’s.

Dot drops by Gran’s one evening with a make-believe pregnancy to get Reg back. “Your baby? Grimm’s fairy tales!” blurts out Pete, protecting Reg. “You talk to the kettle, you don’t expect the pot to answer,” replies Dot. “Go on, get out! Leave the men to men’s business!” says Pete. “Men?” says Dot. “You look like a couple of queers.”

“Don’t take any notice of what Dot said. I tellya, she had me worried for a minute, though,” says Reg. “What are you trying to say?” asks Pete. “You’re the best friend I’ve ever had. Where are you going?” implores Reg. A wounded Pete replies, “I’m gonna get a refill for my lipstick.”