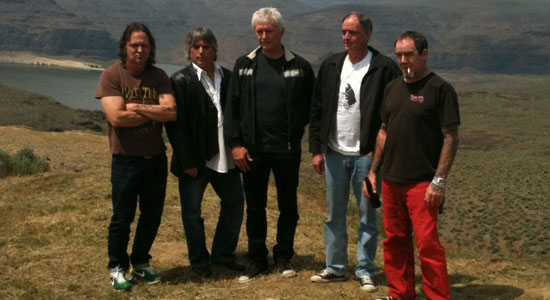 MAGNET favorite Guided By Voices will issue its second album this year (!), Class Clown Spots A UFO, on June 12. A third new LP is rumored to be on its way as well  … J Mascis and friends Johnny Pancake and Pete Cougar will issue the self-titled album by Heavy Blanket (Outer Battery) on May 8. It contains six songs the trio wrote back in 1984 … Sigur Rós’ first studio album in four years, Valtari, will be released via XL Recordings on May 29 … The long-awaited follow-up to Japandroids’ 2009 debut will see the light of day this year. Celebration Rock is out on May 15 via Polyvinyl, and will be supported with a tour across the U.S., U.K. and Europe this summer … Mute Records will issue the as-yet-untitled sixth album from Liars on June 5 … Heaven, the new LP from the Walkmen, is due out June 5 via Fat Possum Records. The band will also headline the National-curated Crossing Brooklyn Ferry in May and will support Florence & The Machine on tour in July … On June 19, the Smashing Pumpkins will issue seventh studio album Oceania with the help of EMI Label Services and Caroline Distribution. This record is yet another instalment in the band’s 44-song work-in-progress Teargarden By Kaleidyscope … Bring Me Home – Live 2011 (Epic) is Sade’s live DVD/CD from the band’s 54-date tour last year, its first after a 10-year hiatus. It’s out May 22 … Soul Asylum has signed to 429 Records, which will issue Delayed Reaction on July 17 … Rhino will issue a rarities collection from Barenaked Ladies, Stop Us If You’ve Heard This One Before!, on May 8. It will include 10 unreleased tracks and two hard-to-find recordings from 1992-2003. The hits the road for a North American tour this summer … June 12 will see the release of the BoDeans’ new album, American Made. They’ll tour the U.S. extensively this spring and summer with a new lineup … The Sun Came Out (Cinema Libre) is a documentary on the making of Neil Finn’s multi-artist charity concerts, 7 World Collide. Eddie Vedder, Johnny Marr, Phil Selway and Ed O’Brien of Radiohead, Sebastian Steinberg, KT Tunstall, Wilco and many more participated in the events. The documentary is available on DVD April 10 … Luther Dickinson is releasing a whopping three records on May 8: the acoustic instrumental Hambone’s Meditation, a self-titled release by the Wandering, and Old Times There…, the second record from South Memphis String Band … Joe Jackson pays his tribute to Duke Ellington with The Duke, due out June 26 via Razor & Tie.