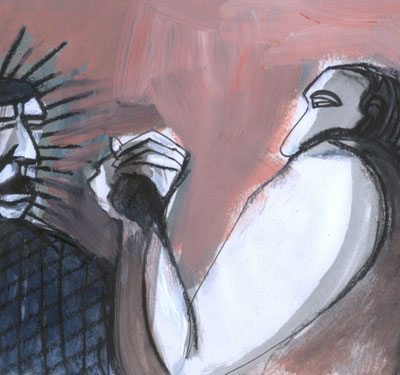 All week the cast-iron rod hung beside the leather strap in the shed, next to the soap, until bath night when, individually they held it like a mediaeval weapon, jabbing it into the heart of the fire as heat flushed their faces, and alone, they allowed themselves to imagine episodes of liberation—and even retribution—as they prepared to bathe their scrawny hillbilly bodies in murky water beside an unnamed stone on which sat the soap. Unnamed by everyone except Odele. It was her thinking rock, although she’d never said it out loud to anyone except herself. It was here that the term “run through with an awl” played over and over in her head, and she blamed the rock for making her think it. This was what happened when she sat on the thinking rock. It made her think awful things about her father. She blamed the rock for putting things into her head, and she thought it best to say them, to let them out, rather than save them, in her head, fearing that she might blurt out “run through with an awl” instead of “please pass the potatoes” at dinner.

Odele kept her small bottle of bubble bath in the pocket of her chenille robe. As she dribbled it across the dirty water she repeated her mantra: “Run through with an awl.” Naked, one foot on her thinking rock, she used the soot-blackened poker to agitate the water, to make bubbles, and she laughed at how she must look, the real Odele, and she added to her chant: “If all eyes were on me now.”