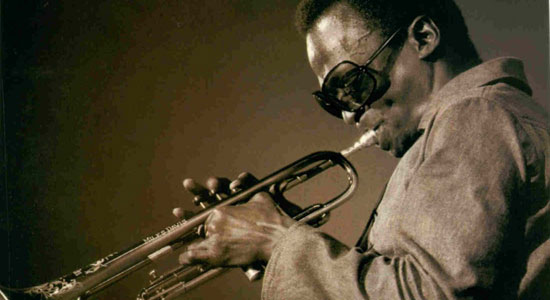 Miles Davis is 47 when he is asked to play New York’s legendary Carnegie Hall. He had played there numerous times before, even recording a live album there in 1961. It’s 1974. Davis is battling massive depression, cocaine and sex addictions, osteoarthritis, bursitis and sickle-cell anemia, among other health problems. His recent explorations into more rock- and funk-oriented sounds have left him bashed by critics and disowned by his peers, many of whom continue to play a never-ending loop of jazz standards.

On March 30, a Saturday night, the audience shuffles in from the freezing wind into their seats. The crowd ranges in age and color, from young hippies to old money. The hip, “with it” kids sit side-by-side with middle-aged tuxedoed couples, expecting to hear “My Funny Valentine.” The wait is longer than expected, with Davis (who lives about 15 minutes away) showing up more than an hour late. Finally, the band walks out, as does Miles with his back turned to the seats. They say nary a word and begin with this:

Al Foster’s punk drums. Three guitarists, wah and fuzz and echo pedals intact. Michael Henderson’s bolted down bass playing. James Mtume’s run-through-the-jungle congas. Miles’ squealing trumpet, also running through a wah-wah. The most appropriate word I can use to describe the music is “scary.” It would seem that Davis had, to paraphrase the late Gil Scott-Heron, turned his sick soul inside out. All the sickness and dread had poured itself into the music. There would be no breaks over the next hour and a half, each “song” transitioning into the next. On first listen, you could wonder if Miles was punishing the audience for some unknown cosmic wrong they’d committed, but then again, it’s just as plausible that he didn’t give a shit if there were people there or not; this was going to happen anyway. He did, however, bring people of all ages and backgrounds together to a common plane—a sense of not knowing what the fuck had just happened.

This is a feeling I can appreciate. In high school, after exposing myself to Frank Zappa, Captain Beefheart, King Crimson, etc., I began to search for more wild, experiment music—an odyssey of weird. At the time, I thought the crazier it was, the better, but that creed would quickly hit a snag: I could not get into jazz. I could listen to the Residents, Silver Apples, Faust or numerous other “rock”-based bands that could quickly drive out a room, but jazz completely baffled me. The more I learned about it, the more I respected it, especially after learning that all the noise and ideas that formed the “groundbreaking” rock that I had learned to love had already been done by jazz musicians, many of whom did it decades before. Still, I couldn’t find my way in. The bop and ballad periods were nice but “boring,” and the more avant-garde artists seemed like torture. Instead of learning to swim, at 16, I jumped in the deep end, getting hold of a copy of the Peter Brötzmann Octet’s Machine Gun, one of the most difficult pieces of music ever created. It was free-jazz at its most abrasive, made the punks look like punks, and I purposefully didn’t bring any other CDs for my Walkman on my way to school one morning, just so I would have to listen to it. The entirety of the album was roughly the duration of my trip, and I’m pretty sure I ran to school that morning, just to make it stop. When I got home, I put it on the highest shelf I could find.

I would keep giving jazz more shots to win me over, but nothing really stuck. (Plus, I could take the risk of buying another grating jazz record I would hate, or get one of the dozens of Zappa albums that I was longing to hear. The choice was basically made for me.) Eventually, I read a review of Dark Magus, which described it as “heavy-metal jazz.” I was sold. Since it had remnants of a rock rhythm, I figured it would help me transition into the genre. But just like a lot of the audience the night it was recorded, I was dumbfounded after listening. I liked it in theory, and it was definitely like nothing I had heard before, but when would I really be in the mood to listen to such angry music? As it turns out, during your teenage years, you’re quite often in that mood. Even though it wasn’t in my regular rotation, it was definitely an experience. It took some time, but it did its job; Dark Magus became the first jazz record I really enjoyed. Although I’m a huge fan of jazz now, I don’t know how much better I understand the album, though I’ve still heard little else like it.

For Miles Davis, that seemed to always be the point. Save for John Coltrane, nobody else in the history of jazz music had pushed its boundaries farther than him. His interest in the rock and funk rhythms of Hendrix and Sly Stone would completely change his style in the late ‘60s, as evidenced on the groundbreaking Bitches Brew. He made new fans amongst the rock audience, and was inspired to make music for young, black America. Over the next few years, his band would play around with instruments such as the sitar and synthesizers. The beat of James Brown would also become a huge starting point for Miles’ music, though the farther he went out, the more the jazz crowd started to disown him. Not that he could give a fuck, which is part of the beauty of the man. He pressed on with the groovy Live-Evil, the über-funk of On The Corner and recorded the Indian-tinged Big Fun, released shortly after the Dark Magus concert.

By the time the Carnegie Hall show came around, Davis was exhausted. He had spent the better part of the last four years touring relentlessly, which combined with his previous (but now kicked) heroin addiction, led to many health problems. Cocaine became part of his regular warm-up routine, seemingly essential to help him perform. Perhaps Davis’ music around this time is a reflection of himself. Though still technically a band leader, Miles became less of the focal point, increasingly letting the other musicians play out, while his trumpet came in here and there to flourish the grooves. There were scant rehearsals, so the young musicians that he would bring aboard would learn in a trial by fire onstage. As is often the case in jazz, especially the amount of improvisation in Miles’ live concerts, one cannot understate the skills and contributions of the band members. Foster and Mtume’s tribal beats drive each tune forward, while Henderson’s bass keeps everyone grounded. The trio of distorted guitars from Pete Cosey, Reggie Lucas and Dominique Gaumont create the swampy atmosphere that the music is built around. The sax work of Dave Liebman and Miles-newbie Azar Lawrence push the spacey sounds into new territory. And even Miles Davis on an off-night, which Liebman describes this concert as, is still the best trumpet player who ever walked the Earth.

There are loud peaks and quiet valleys on Dark Magus, but there’s always something going on. Cosey’s synthesizer bounces and Davis’ organ stabs appear at any time, first sounding out of place, but then not. In a moment’s notice, the nine-piece band can go from the swampy freakouts to subtle solos, with Mtume’s drum machine thrashing and clicking about. It’s a testament to Miles’ experimental brilliance that he used a drum machine during this era. By taking the most human-reliant style of music and mixing in cold, robotic sounds of the gadget was pretty edgy, particularly on “Moja (Part 2),” when the band drops out to a bed of erratic drum-machine gusts reminiscent of Suicide, while the wah-trumpet of Davis’ oblique lines dart above to the ceilings. There was nothing that had ever filled Carnegie Hall quite like this before.

Miles would make a few more studio recordings in the next year, and on Feb. 1, 1975, in Japan, would record two shows that would eventually be released as two live albums, Pangaea and Agharta. That June, Davis stepped away from the music business and spent the next six years laying low. During his absence, his label, Columbia Records, issued several albums full of various outtakes. It was around this time that Dark Magus was released, along with Pangaea and Agharta before it. Unfortunately, Columbia did not think too highly of these records, so Dark Magus and Pangaea were only released in Japan. It wasn’t until the CD reissues in the ‘90s that the rest of the world got to hear this critical period of his career. Maybe if they had been released, the naysayers would change their tune about these years. Of course, Miles probably wouldn’t care less.

Like the author of this article, I’ve never really been much of a fan of jazz. I admired jazz, I respected jazz, could listen and enjoy a lot of it, but when it got right down to it, much of it seemed pretentious or boring or just virtuoso wanking … but then there’s Miles Davis. I have always loved “Bitches Brew” since it was originally released, but I had no idea what else was available. I happened to come across “Pangaea” on vinyl about two months ago, a wonderful 180 gram re-issue on the “4 Men with Beards” label. Criminy; holy grail! This album has been in regular and LOUD rotation on my turntable ever since. This music needs to be played, as the album advises, at “highest possible volume in order to fully appreciate the sound of Miles Davis”. Damn right! Miles Davis in this period of his career punks punk and every other kind of music with any pretensions to being “badass” … Nobody plays meaner than this. After a few weeks of rattling the windows with “Pangaea” I bought “Agharta”, which is also absolutely magnificent. I just bought “Dark Magus” yesterday and haven’t listened to it yet; I’m like a kid looking forward to Christmas morning. Thanks to Miles for being a genius, thanks to the guys with beards for making these milestone albums available on vinyl, and thanks to Magnet for publishing this review.

I’m always amused when something like this is considered jazz. Nothing Miles did in the 70s was really close to jazz at all.