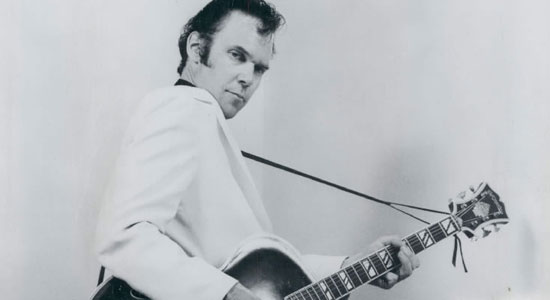 Neil Young had quite the ‘70s. In fact, there are only a handful of the decade’s artists whose work was filled with as much creative riches and uncompromising left turns as his. Though there was gentle folk with Crosby, Stills & Nash, After The Gold Rush’s introspective ballads, the weird sparseness of On The Beach, the proto-grunge of Rust Never Sleeps—to gloss over Neil’s accomplishments during this period like this would be an oversimplification. However, if we must oversimplify it, let’s go with this: Neil Young is one of the greats, and his ‘70s work proves that.

For many of Young’s contemporaries and fellow children of the ‘60s, the next four words would be an unequivocal nightmare: Then came the ‘80s. Many artists woke up to find themselves obsolete in the new decade, and although the rise of punk in the late ‘70s started the assault, the ‘80s finished it. There was still Day-Glo and drugs, but the excess wasn’t the same. Just like the “flower power” sentiments wiped out the stereotypical ‘50s nuclear family, change was bound to happen, as it does with every new generation. Not everyone was oblivious to it; many folks turned in their hippie lifestyles to try their hand at Yuppiedom, the money-grabbing byproduct of Reaganomics. For those who tried to stick to their guns, it often didn’t work out. (See: Led Zeppelin, Bob Dylan, etc., at Live Aid.) It wasn’t simply the result of a change in the calendar; these artists got older. Creative experiments were harder to come by, so they had producers throw suit jackets, slap bass and hair spray on the new tunes, with unsurprisingly terrible consequences.

Some folks, however, took risks with fresh sounds for great results. And though many might disagree, Neil Young was one of them. Unfortunately, this ended up with Young releasing his two weirdest, almost universally derided albums back-to-back, then getting sued by his own record company.

In 1980, Neil and wife Pegi were saddened to learn that their almost two-year-old son Ben was diagnosed with severe cerebral palsy, making it incredibly difficult to communicate with him. (Neil’s other son Zeke, from a different marriage, also has cerebral palsy, though in a milder form.) That fall, the Youngs traveled to the Institute For The Achievement Of Human Potential in Philadelphia, an organization that helps children with brain disorders. As Neil explains in Shakey, Jimmy McDonough’s informative, yet flawed, 2002 biography, “They teach you this program called ‘patterning,’ where you manipulate the kid through a crawling pattern. It takes three people to do it. You do it 13, 14 hours a day, seven days a week. You don’t take any breaks—there’s always one parent in the house. You have volunteers come in. We did that for 18 months without a day off … And it goes on and on and on, for hours and hours and days and days. Until finally you’re brainwashed. And you think the only thing you can do that’s gonna save your kid is this program.” Neil’s 1981 album, Re-ac-tor, features repetitive songs and minimal lyrics inspired by the program, whether consciously or unconsciously.

Young, like many artists, was fascinated by the new technologies rapidly becoming available, in particular new synthesizers and voice-changing vocoders. (The work of Kraftwerk, Devo, and various new-wave artists also piqued his interest.) He began to experiment with these sounds when he signed a multi-album contract with upstart Geffen Records. His first tussle with the label occurred in ’82, when Young showed them some gentler songs he had recorded in Hawaii that year. Since they were unimpressed with the batch, Young submitted his experimental synth-heavy recordings as his next album, entitled Trans. Seeing no results with the “patterning” program, he searched for other ways to communicate with Ben. Young viewed the vocoder, which altered his voice significantly, as a parable for his quest to interact with his son. In Shakey, he explains, “If you listen to all the mechanical voices, if you read the lyrics, listen to the voices, it’s clear that it’s the beginning of my search for a way for a non-oral person, a severely physically handicapped non-oral person, to find some sort of interface for communication. The computers and the heartbeat all have to come together here—where chemistry and electronics meet. That’s what I was getting at. And that was completely misunderstood.” And misunderstood it was. Young kept his privacy by not telling anyone about Ben’s condition or explaining the back-story to the album. Though it was an incredibly brave and personal moment for Young, the album was a flop, and the giant Trans tour was a financial disaster. The young label was worried.

Stressed out by his family’s situation and various business problems, Young’s next project was a set of all-country sessions that would eventually be released in re-recorded form as Old Ways. Unfortunately, Geffen wasn’t pleased with this batch of songs either. In a phone call to him in early ’83, Geffen’s Eddie Rosenblatt told the singer that the new songs were “too country” and requested a “rock ‘n’ roll album.” Young was incredibly angry about the label’s attitude toward his work, but soon after, decided to give Geffen what it had asked for.

The cover of Trans features an animated street. On one side is a futuristic looking town with a space-age car going forward and a robotic-like hitchhiker; on the other is a forest, where an old Cadillac is heading backwards, about to pick up a greaser with a leather jacket. It’s a telling metaphor for a record that was musically on the futuristic side. But when Geffen asked for “rock ‘n’ roll,” Young sarcastically went to the other side of the street. The result was Everybody’s Rockin’, a collection of rockabilly covers and originals that tried its best to sound like the ‘50s, a complete turnaround from Trans, though nonetheless confusing. Said Young, “I almost vindictively gave Geffen Everybody’s Rockin’. Geffen wanted more rock ‘n’ roll. That was the key phrase: ‘Well, you want some fuckin’ rock ‘n’ roll, do ya? Okay, fine. I can do that. As a matter of fact, my uncle was a rocker, and I’ll be him.’ I got way into that guy. I was that guy for months. He was out there. It was a movie to me. Nobody saw it but me, but who gives a shit.” In a 1995 interview with Mojo, he further explained, “Plus, it was a way of further destroying what I’d already set up. Without doing that, I wouldn’t be able to do what I’m doing now. If I build something up, I have to systematically tear it right down before people decide, ‘Oh that’s how we can define him.’”

The backing band on Everybody’s Rockin’ was the Shocking Pinks, complete with upright bass, saxophones and many old collaborators, though in sometimes different roles. Instead of Young playing lead guitar on the album, long-time pedal-steel player Ben Keith was assigned the job, specifically because he couldn’t play lead guitar well. The bulk of the sessions were done in a very short time, in the spirit of the one-take records it was honoring. Because of this, the songs have a rough quality, though the ‘80s reverb on the drums is immediately noticeable. A handful of the album is covers of old rockabilly songs, including Sun Records classic “Mystery Train,” Jimmy Reed’s “Bright Lights, Big City” and Bobby Freeman’s “Betty Lou’s Got A New Pair Of Shoes.”

It’s quickly obvious that Young was having some fun during Everybody’s Rockin’. On “Kinda Fonda Wanda,” he name-checks various girls made famous by other songs (Mary Lou, Long Tall Sally, Runaround Sue) but explains they’re not as good as Wanda, “‘cause Wanda always wanna, wanna, wanna.” “Payola Blues” is dedicated to Alan Freed, the legendary DJ whose career was destroyed after accepting bribes to play records. While Young explains it’s wrong to accept money for airplay, it had only gotten worse, telling Freed that “the things they’re doing today will make a saint out of you.”

The highlight of Everybody’s Rockin’ is “Wonderin’,” a song that was written in 1970, performed sporadically, though never recorded. The song is given the ‘50s treatment, with doo-wop backup vocals, upright bass and an earnest vocal from Young: “I’m wonderin’ if you’ll come home, I’m hopin’ that you’ll be my baby. I’m wonderin’ if I’ll be alone, knowin’ that I need you to save me.” It’s a short and sweet pop song, which doesn’t try to be anything more than that. Although a video was created for the new MTV, Young’s first, the single flopped.

When Geffen heard the album, they were furious, even locking Young and his band out of the recording studio, releasing it as is. (This is why Everybody’s Rockin’ is only 25 minutes long. The two songs that were slated to be recorded, “Don’t Take Your Love Away From Me” and “Get Gone,” later appeared as live versions on 1993’s Lucky Thirteen comp.) Besides an MTV contest that gave away a Cadillac convertible, reminiscent of the backtracking one on the Trans cover, there was little promotion for the album, and it soon flopped.

After a tour with the Shocking Pinks, Young was surprised to find that he was being sued by Geffen Records for creating music that was “not commercial” and “musically uncharacteristic of Young’s previous recordings,” to the tune of $3.3 million. The lawsuit was unprecedented, a giant slap in the face to Young and his art. Young filed a counter suit for $21 million, after Geffen had previously told him that they would not meddle in his creative affairs. It hurt Young badly, and he wouldn’t release another album for a few years: Old Ways, the album Geffen didn’t want in the first place. The lawsuit was later settled out of court, with David Geffen personally apologizing, but the damage was done. Unfortunately for Young, he was still under contract with the label for a few more albums. Ironically, after leaving Geffen for his original label, Reprise, in 1988, he released This Note’s For You, his biggest hit of the decade.

The legacy of Everybody’s Rockin’, along with most of Young’s ‘80s output, is usually maligned, though even more usually ignored, which is a shame. In the Mojo interview, Young asked, “What am l? Stupid? Did people really think I put that out thinking it was the greatest fuckin’ thing I’d ever recorded? Obviously I’m aware it’s not.” Almost no superstar in rock music takes as big of risks as Neil Young, even today, and it seems he doesn’t regret any of it, remarking in a 1985 interview with Musician, “To get sued for being noncommercial after 20 years of making records, I thought was better than a Grammy.”