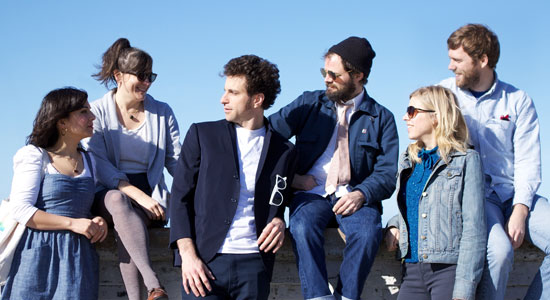 When you’re a band that looks to Matthew McConaughey as a role model and is comprised of a seemingly endless list of members spanning the globe, you’re allowed to make up your own words. Self-described “hammjammers” (hammjamm being loosely defined as “when a good time gets better”), Still Flyin’ is such a band. Founded and led by Masters Of The Hemisphere’s Sean Rawls, the San Francisco-based collective is all about fun times and good friends, as evidenced by its chorus-like harmonies and synth-heavy pop hooks. Multi-instrumentalist Gabe Saucedo made us this “touring-themed” mix tape in honor of the band’s trek across the U.S. next month supporting new album On A Bedroom Wall (Ernest Jenning).

Lee Hazlewood & Nancy Sinatra “Got It Together”
It’s touring time for Still Flyin’ again. This is no small feat, as our members have somehow managed to scatter themselves all over the world. I myself live 400 miles from my nearest bandmate, and that’s the closest proximity of cities in the bunch! It’s easy to lose focus this way, but somehow we manage to pull ourselves back together every once in a while. Video

Big Audio Dynamite “Everybody Needs a Holiday”
The best part of touring, obviously, is not being at work. The daily grind has a way of, well, really grinding you up. It does this on a daily basis. Video

Sparks “Cool Places”
The other awesome thing about touring is getting to visit a bunch of different cities, some of which you never even thought of visiting, but which turn out to be really cool. Like, I would have never bothered going to Cleveland, but ever since a tour routed me there, I always look forward to going back. Video

Howard Jones “New Song”
One of the toughest parts about being in a band of multiple home bases is attempting to write and learn new songs together without ever being in the same room. You can practice all you want at home, but invariably, nothing will sound right when you all meet up to play it together. Video

Ian Dury “Sex&Drugs&Rock&Roll”
Most people think these are the three food groups I eat from everyday. Not really true. I’m married so I don’t really get to have sex anymore. (I make love.) I never really got into drugs. Plus, Still Flyin’s less rock ‘n’ roll, and more kinda new-wave/kraut/dub-reggae/italo-disco/yacht-pop. Video

Pilot “Penny In My Pocket”
Another misconception is that I’m making money off of playing music. Poppycock! Music as a viable source of income died with mp3s, and most people suddenly having really shitty taste in music. Video

Tom Robinson “2-4-6-8 Motorway”
Whenever folks think about the life of a touring musician, I bet they don’t think about what a huge percentage of our time is spent crammed in a van with a bunch of sweaty dudes you wish had showered more recently, and vice versa. The percentage is 90{e5d2c082e45b5ce38ac2ea5f0bdedb3901cc97dfa4ea5e625fd79a7c2dc9f191}. Video

Loverboy “The Kid Is Hot Tonight”
For all it’s flaws, a career in music is still the only way I’ve ever been able achieve that sweet feeling of being part of a group of people who, if for only one hour a night, are completely functioning as one bad-ass unit, while still somehow feeling like you’re the only one that matters. Video

Gleaming Spires “Are You Ready For The Sex Girls”
The most rewarding part of being a musician is, of course, the scores of beautiful women (or men) who basically want nothing more than to fulfill your every sexual desire, in payment for having performed music that they heard you play on a musical instrument (or laptop). I’ve never been a recipient of such lusty fandom, but I’ve definitely heard about those kind of perks before. Video

Gowan “Moonlight Desires”
I don’t know what it is about touring that makes you constantly need to satisfy your most base and animalistic urges. For instance, I hardly drink at all when I’m at home, but on the road, it’s like I’m a raging fuckin’ alcoholic!! Video

Todd Rundgren “Bang the Drum All Day”
I said it before, and I’ll say it again. Who cares about whatever hardships it may or may not cause. Being a touring musician is super rewarding, and I’m lucky to get to be one now and then. If I had my druthers, I’d be doing this for the rest of my life. Maybe I will have my druthers. Who knows? Who knows what that word even means? Video

Phil Oakley & Giorgio Moroder “Together In Electric Dreams”
Another benefit of constant touring is I’d never have to say goodbye to my pals in the band. We’d always be together. Together in electric dreams. Which I guess is like email. We mostly communicate through e-mail. Video

Surely a pishtake! Current grand champion – Worst Mixtape Ever Compiled in the History of Recorded Music…(Bang the Drum All Day excepted)

fuck you, motherfucker THIS IS GOLD

Whatever man. This mix-tape is the bomb diggity dawg. Don’t be a hater of the hammjamm.