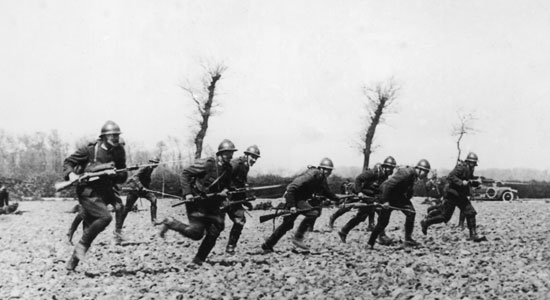 Taylor-Taylor: Have you ever looked into the causes of WWI? Turns out there isn’t any part of this totally fucked-up war that you couldn’t make a laugh-riot comedy out of. This was the last war with sabre-wielding cavalry. The reason this was the last was because all the cavalries got massacred when they charged with their swords drawn headlong into tanks. Also whole armies would live in miles and miles of muddy trenches with no shoes and the flesh rotting off of their feet until they were ordered to hop up out of the trench and sprint directly into hundreds of rifles and machine-gun fire. I’ve seen a British comedy about this called The Black Adder, and it stars Mr. Bean.

Also I realized recently that I had no idea even who was fighting whom in it. Well, it was France, Russia and England against Germany, Austria-Hungary and sometimes Bulgaria. I think Italy was supposed to be in, too, but wasn’t. So apparently after a Balkan war involving India, Greece, England, Senegal, Italy and Serbia wherein the Russians got shamed, they publicly proclaimed that they were going to totally overhaul and modernize their army. So Germany decided to provoke a war with Russia before they became unbeatable. At this same time the Austrian heir and his wife were murdered by a Serb military agents in order to also provoke a war and what with all the alliances and treaties France and England had to come in on the side of Russia. By the way, that Austria-Hungarian heir was Franz Ferdinand.

One reply on “From The Desk Of The Dandy Warhols’ Courtney Taylor-Taylor: World War I”

This is bar far the most childish and stupidest description of any war in the world. I still can’t believe what I just read. Mr. Bean? JC