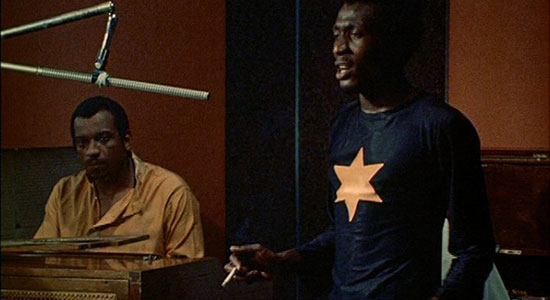 In a richly shot portrait of a throbbing Jamaica seldom seen by American tourists hiding inside the gated confines of Club Med, The Harder They Come also sports a dazzling soundtrack of early reggae, including Jimmy Cliff’s stirring title song, the Maytals’ “Pressure Drop” and Desmond Dekker’s “007.”

A battered city bus careens through the teeming poor side of Kingston, stopping just long enough for Ivan (Cliff) to get off. Wearing a pork-pie hat and a pullover polo shirt, he’s come straight from the back country to try his luck at cutting a hit record in the big city.

Speaking in a patois so thick it requires subtitles, a pushcart handler (Volair Johnson) says, “Hey, country boy, out of my way!” “You know the way to Milk Lane?” asks Ivan, struggling with two suitcases and an armful of parcels. “If you have money, you go anywhere. If you don’t, you fart,” replies the porter. “Give me 50 cents and help me push and I’ll show you.” When Ivan crosses a busy street too soon, the porter warns him, “That red light means stop! That’s why you country boys come to town and get dead.” When the porter asks him to collect a debt from a friend across the street, that’s the last Ivan sees of his belongings.

Desperate to make a little cash, Ivan pops out of the shrubbery of an upscale home, startling the lady of the house (Beverly Anderson) as she’s sipping iced tea on the veranda. “I can wash your car. I can do your gardening,” he offers. “Look, my husband washes the car downtown, and we have a gardening service. How’d you get in here, anyway?” “The gate was open,” says Ivan. “Well, when you go outside, make sure you lock the gate behind you,” she tells him.

Dressed in a floppy cloth cap, cocked at a rakish angle, Ivan reports for work repairing bicycles in the garage of a local preacher. “You have on a pretty hat this morning. You only need a gun to look like ‘Johnny Too Bad,'” remarks a co-worker as the Slickers’ song of the same name pulsates on the radio. “Before you get the gun, get a broom and sweep out the shop.” The preacher (Basil Keane) finds Ivan, late that night, listening to secular music. “You gonna make the Lord come back and find you doing the boogie-woogie?” he shouts. “You should be reading your Bible! Don’t walk away. You are impertinent!”

Before heading out to a discotheque to catch the first public spinning of his debut single, Ivan tells his girlfriend, “You want me to work for $10 a week for the rest of my life? I’d rather die. All that talk about milk and honey in the sky. I want mine down here tonight!”