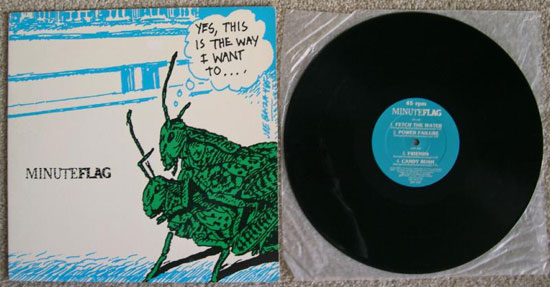 “I’ll tell you about ‘punk rock’—‘punk rock’ is a word used by dilettantes and heartless manipulators, about music that takes up the energies, and the bodies, and the hearts, and the souls, and the time, and the minds of young men, who give what they have to it, and give everything they have to it. And it’s a term that’s based on contempt; it’s a term that’s based on fashion, style, elitism, Satanism and everything that’s rotten about rock ‘n’ roll. I don’t know Johnny Rotten, but I’m sure he puts as much blood and sweat into what he does as Sigmund Freud did.” —Iggy Pop, 1977

I was going to start this piece by warning that it has a sad ending. I would have explained that it’s the story of two of rock history’s most innovative, engaging and important groups; two groups that never set out to do anything else but voice their opinions and have fun in the process. It would go on to state that these two bands seemingly put their music ahead of all else, which would warrant the title of “true artists.” But I would again remind the readers that this story has a sad ending.

In fact, I wrote most of the article like that. Though I was coming from the right place, the result was boring and saccharine. I tried to be a “real writer” by being self-important, but when I read it back, this was extremely obvious. So I scrapped it all at the last minute.

I deeply revere all the artists that I cover for Hidden Gems, but I especially wanted to do a good job on this one. That’s because this story involves Black Flag and the Minutemen, two bands that had a disparate sound (even if it did branch from the same place), but shared similar ideals. Two bands that all together made up a ragtag bunch of goofy misfits—“fucking corndogs”—who shared a label, a van and the belief that anyone could and should brave the bullshit to express themselves. The music they made and the groundwork they laid is the reason why so many people of my generation have a venue to showcase their thoughts—be it bands, painters, filmmakers, or even schlubs like me who get to write about what they love. “Our band could be your life … ”

Black Flag, Minutemen and their other SST labelmates didn’t single-handedly change our world, but they were allowed more freedom by “standing on the shoulders of giants” like Iggy, Beefheart, Dylan, Elvis, Coltrane, Guthrie, Stravinsky and on and on. As the Desperate Bicycles said, “It was easy, it was cheap, go and do it!” And they did. And we did. And the kids down the line will, too. I knew that I couldn’t feel good about this piece unless I tried my best to portray just a modicum of the thankfulness that I, and hordes of other goofy misfits, have for them—people who get nothing from Hallmark cards, but receive their inspiring, fuzzy feelings from “This Ain’t No Picnic” or “Rise Above.” I wanted to say that when they write the punk textbooks, the best ours or anyone else’s generation could hope for is that it added to the good score and came out alright.

So after I ditched my first attempt, I listened to this week’s subject—1986’s collaborative Minuteflag EP—once more, when it finally hit me that I had everything wrong. This story doesn’t have a sad ending. The climax may be somber, but that’s not the end.

Black Flag and the Minutemen have a long history together, one that stretches for almost their entirety. Greg Ginn, Black Flag guitarist/leader, first met Mike Watt and D. Boon in 1979, handing out flyers for one of their shows before a Clash concert in Santa Monica, Calif. Since they were from the same area, Ginn invited the Reactionaries—an early group of Watt, Boon and drummer George Hurley—to play the gig. The next year, after their first show as the Minutemen (sans Hurley), Ginn extended an invitation to record the band and release a seven-inch on his SST Records. With George back on the drums, the result was Paranoid Time, the label’s second release after Black Flag’s Nervous Breakdown EP. Over the next five years, like so many of their punk cohorts, the two bands became intertwined.

The styles of the two, just like the punk scene they took part in, shifted vastly over the next few years. Unlike the trio of Minutemen, Black Flag changed lineups regularly, settling with Henry Rollins in ’81 as the group’s final and most famous vocalist. Boon and Co. would become weirder, funkier and more politically conscious, while the Rollins-led Flag drifted from the hardcore punk it concretized to celebrating heavy metal, jazz and spoken word. Both bands continued to release nearly all of their music on SST (or the Minutemen’s New Alliance imprint), while occasionally touring together in a very crowded van on a less-than-shoestring budget.

In February ’85, the Minutemen finished recording their Project: Mersh EP, a tongue-in-cheek attempt by the band to write a hit. A few weeks later on March 3, as Black Flag was making the full-length Loose Nut at Total Access Recording in Redondo Beach, the band invited Watt, Boon and Hurley for a loose jam session. Along with Black Flag’s current incarnation of Ginn, Rollins, bassist Kira Roessler and drummer Bill Stevenson, the seven-piece supergroup spent the better part of that Sunday playing music and hanging out. According to an interview with Watt in Flipside a few weeks later, the original plan was to release these recordings as a benefit for anti-nuclear group Alliance For Survival; however, this was not the case. It’s possible that the plans for its publishing were drawn up in April, when the tapes were edited and mixed. Whatever the case, it was ultimately decided that the sessions would not see the light of day until either one of the groups was no more.

Minuteflag’s opener is also the only song with lyrics, written and sung by Boon. Entitled “Fetch The Water,” the song details a mother’s command to her oldest son to bring back water so the family can boil potatoes for dinner. After an arduous trip, including getting knocked over by a stranger, the son returns to find that his mother has cooked the food in his absence and there’s none left. When he’s not doing his best Speedy Gonzales impression during the song, Rollins sings backup and laughs maniacally at the boy. The fun, catchy calypso groove sounds like nothing else in either group’s canon, as well as being (I believe) the only instance of Rollins yelling “¡Arriba!” on a Black Flag record.

During Black Flag’s Loose Nut sessions, Ginn, Roessler, and Stevenson also recorded The Process Of Weeding Out, an instrumental EP that leans heavily into the world of free jazz (which Ginn would later explore with his Gone side project). While a lot of fans didn’t appreciate these experimental sounds, it’s these varied influences that made the two groups so fresh and interesting for so many years; it’s also these influences that are audible on Minuteflag. On “Power Failure,” the treble of the guitars, combined with the wild percussive rhythms (featuring Hurley on bongos), get “out there” and fast. Watt and Roessler’s bass work on the loose-structured “Friends” give the tune a dense, low-rumbling bed that Miles’ early-‘70s work built on. The only common “punk” sounds found on the record are on “Candy Rush,” which begins with the voice of engineer Dave Tarling telling the band there’s a limited amount of tape left, evolves into a “L.A. Blues”-like noise jam, before abruptly cutting off without warning.

On December 22 of that same year, Boon’s life was abruptly cut off without warning—the victim of a freak van accident—at the tragic age of 27. Leaving his friends, family, bandmates and fans devastated, Boon’s untimely death was the worst possible way for Minuteflag’s stipulation to be reached. With the Minutemen no more (and Black Flag calling it quits some months later), SST issued the recordings in mid-‘86. In honor of their fallen friend, etched into the vinyl was this message: “If There’s One Thing Life Can Guarantee … It’s In Keeping It’s Meaning A Mystery.”

Originally this was to be the aforementioned sad ending and depressing it would have been. But I couldn’t leave it at that. There’s enough bleakness in the world as it is that it forces one to grab hope wherever you can. Some people might gain it with sentimentalities, like “life goes on” or something similar; for some, it’s a dizzy song about your mom frying potatoes without you. There’s no wrong way to get by, and plenty of room for both, although I know which camp I look forward to hearing.

2 replies on “Hidden Gems: The Minutemen And Black Flag’s “Minuteflag””

Well done, you did them proud.