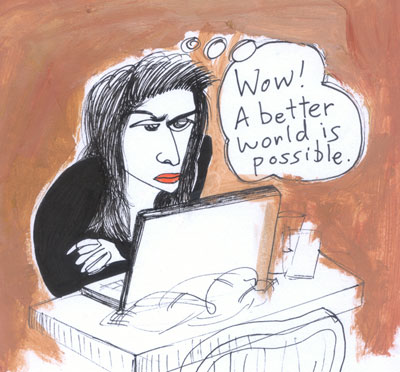 The co-founders of riot grrrl came to watch my band Mecca Normal when we played in Olympia. At that time I spoke a lot between songs about women getting together with other women to form bands to express themselves. The songs I was singing were from our first LP (1986), which we put out on the label we created, Smarten UP! (which evolved out of my fanzine by the same name), and subsequent albums on Olympia’s K Records, which is why we were in town a lot. I gave fairly long introductions to “I Walk Alone,” “Strong White Male,” “Man Thinks Woman” (when he talks to me, something not quite right, there’s something wrong with me) and “Joelle,” which is about a young woman confronting sexism within a relationship.

Mecca Normal started in 1983 and we’re still active today—working on a new album with song lyrics out of my recently completed novel “The Black Dot Museum of Political Art”—long after the main thrust of riot-grrrl activities have subsided. When, as a group, riot grrrls weren’t doing interviews, I was contacted quite a lot and asked about them, and while I didn’t speak on behalf of riot grrrl, nor was I a riot grrrl myself, I did take the opportunity to hone skills related to saying what I wanted to without necessarily answering exact questions. I had, for years prior, worked to get interviews to express ideas about feminism, social injustice and grassroots organizing. It was, of course, fascinating to have something of what I was talking about acted on and developed into something much larger.

Many years later, Mecca Normal created a classroom event to inspire young people to consider including political ideas in their creative self-expression. The lecture is called “How Art & Music Can Change The World” and within a segment about our history we tell students that we did change the world so we know it can be done. We explain our connection to riot grrrl and how the co-founders have said that we inspired them. This is the kind of statement that might sound like bragging, but within the context of our lecture, it is evidence of how it is possible to use art and music to create progressive social change. If we were talking about a non-political situation of one band influencing another—building fan bases—then it would all be totally boring, but, considering what’s at stake (freedom of creative expression for women and beyond), I’ve always been happy to be referred to as an influence on riot grrrl so that I can use it to encourage other people, to show them that it isn’t impossible to change the world.