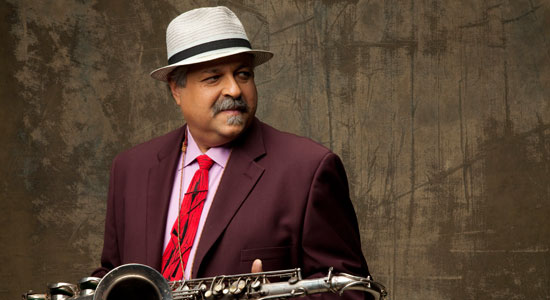 Out of the frying pan and into the fire. If the Montreal Jazz Festival was a mainstream party meant to appease the masses by including heaping helpings of rock and pop, the Copenhagen Jazz Festival is a genuine jazz celebration for genuine jazz fans. The Danish appreciation for creative exploration and spontaneous improvisation was already in high gear when I arrived on Sunday, and I was happy to catch several genuine jazz shows, all featuring fantastic drummers.

Besides performing with Wayne Shorter’s group for the past 14 years, drummer Brian Blade leads his own collective, the Fellowship Band. Blade’s group of young lions turned the lovely Betty Nansen Theater into a house of musical reverence, playing ballads, blues and post-bop with great feeling. Blade himself was an adroit and sensitive timekeeper who worked with a high nervous energy that enlivened his bandmates. The tasty dialogue between saxophonists Melvin Butler and Myron Walden was impressive, but Blade’s own jittery backbeat and sublime soloing was the most entertaining part of the show.

The newly reconstituted Jazzhouse nightclub flooded out last year during the festival and had actually been closed for eight long months before reopening. Just in time, I say, as the Joe Lovano/Dave Douglas Quintet presented a rousing performance to a full (jazz) house. Showcasing monster drummer Joey Baron, the Lovano/Douglas band is a still-evolving collective called Sound Prints, inspired by the dancing musical spirit of Shorter. The group doesn’t play the compositions of Shorter, but rather, they’re happily goaded by the nature and the temperament of the great composer/performer (who’ll be playing here at the festival tomorrow, by the way). Playing original tunes by both Lovano and Douglas, the group is showing growth and cohesion on the road, and with Baron drumming up a storm, this is an all-star ensemble that cannot and will not be denied. Over breakfast this morning Lovano told me that that they’re not-so-secretly hoping to commission Shorter to write a new piece especially for this band. I really hope so too.

After the Douglas/Lovano group and its very satisfied audience left the Jazzhouse, I stuck around the near-empty club to see drummer Bob Moses with the Østergaard/Nilsson Experience. Whoever Østergaard and Nilsson are, they sure sounded good, especially with Moses pushing the group. Moses has been around since the 1960s and played with Larry Coryell in one of the first-ever jazz-fusion ensembles (the Free Spirits) and even appeared on Pat Metheney’s solo debut disc, Bright Size Life. Last night, Moses put on a miracle of a show for about two dozen people—playing his tiny drum kit with brushes, mallets, sticks, rubber tubes and lord knows what else. Moses gave off a spiritual vibe as he went about the business of playing the drums. He resides and teaches in Boston but is clearly a citizen of the world who brings a lifetime of experience to any gig that’s lucky enough to have him.

I’m kind of jetlagged and jazzed out after coming straight to Copenhagen after 10 days in Montreal. Stay tuned for more cogent and informative jazz coverage as the week goes on.