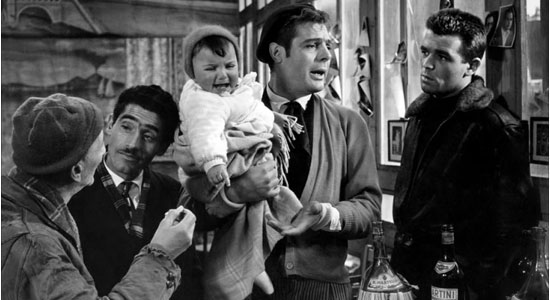 Five habitually unemployed men, living in depression-choked Rome, have hit upon the perfect early-retirement scheme. They will enter a vacant apartment late at night and tunnel into the pawn shop next door to crack its safe. What could possibly go wrong with such a well-conceived plan, formulated by men who haven’t ever done anything of note?

Tiberio (Marcello Mastroianni), a photographer so down-on-his-luck he’s pawned his camera, minds his baby while his wife languishes in prison for selling bootleg cigarettes. Peppe (Vittorio Gassman) is a china-chinned prize fighter who signs on after being knocked-out one too many times in the ring. Ferribotte (Tiberio Murgia) is a pencil-mustached Sicilian who looks like a small-time Don about to get whacked in the second reel of a mafia film. He keeps his lovely sister Carmela (Claudia Cardinale) locked in their apartment. Mario (Renato Salvatori), a James Dean look-alike, meets the girl by impersonating her brother who’s forgotten his keys. Capannelle (Carlo Pisacane) is a wizened small-time criminal with a passing resemblance to Jimmy Durante.

Released early from prison, Cosimo (Memmo Carotenuto), who’s unwittingly divulged the caper’s details to Peppe, decides to take a shortcut to untold wealth by walking into the pawn shop with a newspaper draped across his arm. “Do you know what this is?” he asks the clerk, revealing a pistol under the newspaper. “Sure, I know it,” says the clerk, sizing-up the weapon. “It’s a small caliber Beretta in very poor condition. One thousand lira.” Disgusted, Cosimo seizes the gun and walks out of the pawn shop.

The big day finally dawns. Peppe cuts the lock on a coal-bin’s screen. “Slide down the chute onto the coal below,” he says to Ferribotte. “What coal? It’s sewage, and it stinks!” says Ferribotte angrily, knee-deep in filth. When Tiberio picks up the suitcase full of burglar tools, they clatter to the floor. “I thought it was locked,” he says. Halfway across a large skylight, a light goes on underneath, trapping the burglars for an hour while a couple has a domestic argument below.

Finally inside the apartment, Capannelle taps on the wall like he knows what he’s doing and begins to drill a pilot hole for the big tunnel job to come. He immediately hits the water line, soaking everybody to the skin. After an hour of cranking the handle of a large battering ram to break through the wall, Peppe says to Capannelle, “Go into the kitchen and get me a glass of water.” Minutes later, they open a gaping hole revealing Capannelle at the kitchen sink. They’ve been drilling into the wrong wall.