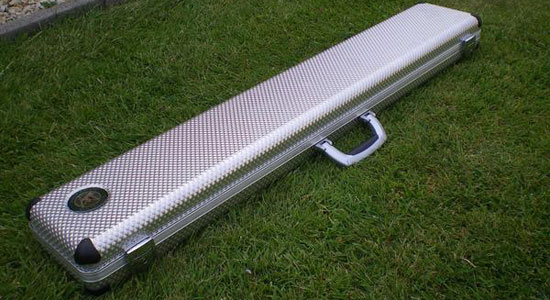 Shapiro: I’m still trying to find the perfect case for carrying multiple guitars on airplanes and tours. The best one I found is by Scott Dixon. They were sold by Fender for a while, and then discontinued. Travel restrictions are usually 50 pounds. The case I got can fit three guitars and is just less than 50 pounds. It’s made of aircraft aluminum — very tough and lightweight. I believe you can still order direct from Scott Dixon U.K., but they are not cheap. I got two Les Pauls and one Strat in there no problem. The only problem is the one I have won’t fit my 335, Flying V, Gibson Firebird or Jeff’s Guild Thunderbird. They do make triple-bass cases, which are taller and should fit the Firebird and Thunderbird and Steve’s Fender Precision bass, and double acoustic cases, which should fit the 335 and Flying V. I guess I need to get all three! Hey, Scott, how about a sponsorship? I better write him an email.