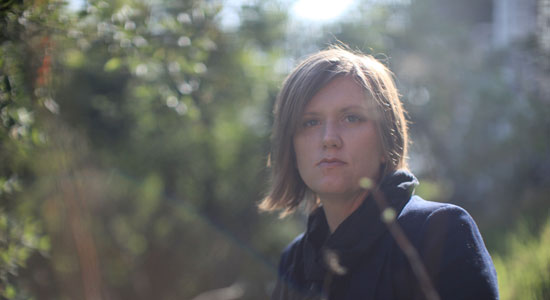 Not long before the major-label landscape collapsed in a heap, only to morph into a crud formation of reissue-happy conglomerates, Garrison Starr signed with Geffen. It was 1997, and if ignorance truly is bliss, the 22-year-old singer/songwriter from Hernando, Miss., couldn’t have been happier. Those 15 years feel like a lifetime ago for an older, wiser, slightly more cynical Starr, who’s busy promoting her sixth full-length effort, the self-released, fan-funded Amateur (Radtown Music). It took her some time to come to terms with her sexuality (and others’ opinions of it), and it’s taken her even longer to get comfortable with her creative self. To that end, the angsty-yet-optimistic, stylistically diverse Amateur is a coming out of sorts. Making her way to spin class in typical Los Angeles traffic, Starr explains why she’s so big on the concept of starting over. She will also be guest editing magnetmagazine.com all week.

“Between The Devil’s Rain And A Dying Language” (download):

I’m embarrassed to say that I haven’t seen you live since the tour for you first album, Eighteen Over Me. What was life like on a major label?
I loved the people at Geffen, but it was an unfortunate time to be a part of that, just because of everything that unfolded. I look back at that time and see someone I don’t even recognize—I don’t know that person. I’m so much more excited about where I am now, because I have my shit together. There were all these tools I didn’t have and stuff I didn’t know. When you’re younger, you think opportunities like that are always going to be there.

While your music has evolved over the years, the one thing that hasn’t changed much is your voice—it’s still got that girlish quality.
My singing is the one thing that people always point to. I do think that I have a unique vocal quality, and it will continue to set me apart—which is cool.

What’s the story behind the title for the new album?
I was originally going to call it A View Of Life From An Amateur. But the song titles are really long, so I couldn’t have a long album title on top of all of that. In so many ways, I feel like I’m starting over again. Maybe I’m too hard on myself, but I feel like my career has been extremely unfocused. I’ve been doing this for so long that some shit’s got to get reinvented.

Listening to Amateur, it’s not like you’re stripping down or scaling back. But it is a lot less one-dimensional than your Geffen/Interscope stuff.
When I was coming up, artists had a team of people making decisions for them. Now, artists are much more empowered. Out of necessity, they have to do so many things on their own. From that standpoint, it’s exciting for me. But, in a lot of ways, I still feel like I have no idea what I’m doing.

When it came to your image, the label folks didn’t know what they were doing, either.
I was this little lesbian who was having this identity crisis; I didn’t have any sense of self. I had no idea what I should look like or how I should be presented. I never felt totally comfortable, because I didn’t know what I wanted.

One thing you’ve never done is make a big deal about your sexuality.
I could give two shits about being gay; it’s nothing that I care to get on a platform about. But I grew up in such a conservative Christian environment that it was a struggle—and it wasn’t going to be OK with everyone else. I just felt really awkward. My parents are two of the nicest people you’ll ever meet; they’re rad. But they’re also two of the most conservative people you’d ever want to meet.

What about now?
My parents still struggle with it, but it’s come a long a way. I’m an only child, so it’s either get onboard or, “See you later.” On a spiritual level, moving to L.A. was such a big deal for me. When I was in the South, I felt like people were always looking at me, and everybody’s always up in your business. Out here, you can set your hair on fire or have a ménage à trios at an intersection, and nobody gives a shit.

Tell me about “The Needle And The Vein,” from the new album. Talk about a provocative title.
I wrote it at my friend’s apartment in Brooklyn. I’d been in and out of this long-distance relationship with this girl, and it was really toxic—and I knew it. I just related it to drugs. It was written extremely quickly.

So it’s not meant to be taken literally.
Exactly. I have lots of vices, but I’ve never tried heroin. But I do like that it’s kind of hanging out there for people to wonder about.