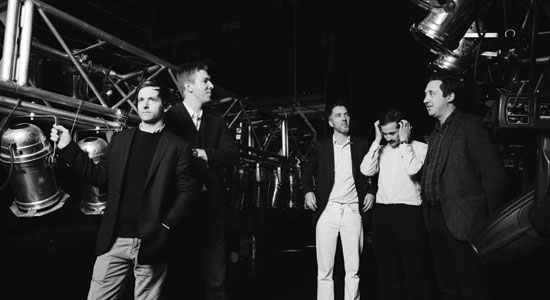 When they’re not touring, the Walkmen are scattered, with two guys in Brooklyn, two in Philly and one in New Orleans. MAGNET’s Steve Klinge spoke with singer Hamilton Leithauser (from the band’s Brooklyn studio) and bassist Peter Bauer (from his home in Philly) about the making of Heaven, the Walkmen’s so-called “mature” album.

Did you go into this album with a plan to make something different?
Leithauser: We hired Phil Ek, the producer, so we knew that we were going to have a new personality involved. The point of doing that is to make sure it was going to be different. And when we got there, we had all these demos, but we had never played anything live, all five of us. We wanted to be sure that once we got (to) playing that it didn’t turn into the same old thing. So many ideas can die the minute you get everybody involved. It’s not anybody’s fault, but we’ve been together for so long that we can fall into the same traps so easily.
Bauer: I think we really questioned what you’re supposed to do next. You don’t want to put something out that people have heard before. It doesn’t ever work, for one, and two, it doesn’t feel like there’s any use for it anymore. So, whatever we do, it’s going to have to be really different for us to do something.

There does seem to be this element of doo-wop or pre-rock stuff to the album. Was that a deliberate goal?
Leithauser: For a very long time I’ve wanted to do something that was just vocals, a cappella. It’s really fun that we toured with Fleet Foxes, and I think they’re absolutely fantastic, but it really wasn’t inspired by them, even though Robin Pecknold sings on the record. But it was supposed to sound more like Dion & The Belmonts and the Fleetwoods and bands like that. I wanted to do really intimate and really great-sounding back-ups. I think that’s something I’d like to do a lot more, because I think it’s something we’ve gotten better at, even since we did the record.
Bauer: I think it’s definitely a big part of “We Can’t Be Beat,” and that’s totally Ham. I think that’s my favorite song on the record.

What do you like about that sound?
Leithauser: We listen to a lot oldies and a lot of Elvis and girl groups and guy groups from the ’50s and ’60s. It can be quiet and intimate, but it can also be so loud, like the Coasters when they have all those guys singing—it’s just so loud and commanding and immediate. It still holds up; it sounds so great now, you know? That was one frame of reference when we were writing songs.

A lot of people have called Heaven your most “mature” album. What do you think of that? It really seems like a loaded comment to me.
Bauer: I think it’s a straight-up insult. If it’s in the sense of the emotions or what the songs are about, that’s fine, I guess; but if it’s in the sense of you’re over the hill and looking back, then that sucks, you know? It’s hard to say. There’s a part of me that’s wanted to be 60 years old since I was 16 years old, and I think that’s a common strain through our band. The people that we probably love the most probably didn’t come into their own until their 30s, 40s and 50s. I don’t relate to the whole rock ‘n’ roll myth of youth and partying, Led Zeppelin and something like that. You put pictures of yourself and your family on the inside of the record, and that was sort of the idea, that we don’t like that kind of myth and that kind of life. But I think we also pegged ourselves in a spot that we’re now trying to crawl out of. I don’t know if it’s some sort of incredibly twisted way that things are now, that it’s over the hill to have children or something.
Leithauser: It didn’t feel mature making it. I don’t know what that means. When I think mature, I think we’re going to start sounding like Wilco or something like that, I guess. That’s the only frame of reference I’d have; to me, that’s a mature rock band, for better or worse. I don’t know: We’re older. We consciously cleaned up the playing and cleaned up the tones. I sang lower. Our other idea for the cover is what we used for our new seven-inch, which is of a tornado, and it would have been much darker vibe to the whole thing. I wonder how people would have taken it if we had done that? I think people would say different stuff about the music, which is really frustrating because the packaging, as much as I like it, is really a secondary thing.

Do you pay attention to year-end lists?
Leithauser: I’m looking forward to seeing this one! I don’t seek out year-end lists, but if I see it and we had a record out, I’m interested to see if we’re on it. I’m thrilled, though; thanks to everyone there.