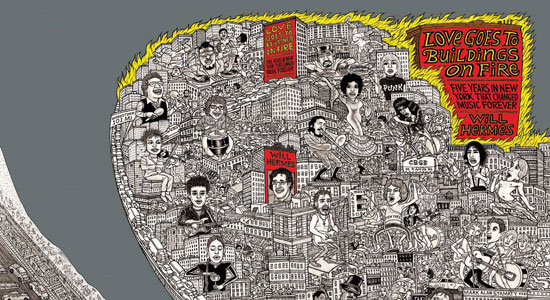 DeSimon: Will Hermes‘ book, set in mid-’70s NYC and named after the first Talking Heads single, traces the evolution of the rock, dance, DJ/hip-hop and Latin music scenes as the city crumbles. This was the New York that you thought you were moving to if you played music and moved here anytime before 2000. Of course, by they time we showed up at the end of 1994, most of this was long gone, but you could still find remnants of the loft culture, and CBGB was still a thriving, if disgusting venue with Hilly sitting by the door. The book’s a little too Patti Smith-heavy for me (I get it, she was a rock ‘n’ roll poet), but scenes like Brian Eno hanging out at the Talking Heads’ loft in Long Island City talking about working together more than make up for hearing about the live versions of “Piss Factory.” The website for the book is incredible, too, with links to rare video (an early Television rehearsal, for instance) and documentary footage of a time when New York may have been a mess, but at least it was a vibrant, affordable mess.