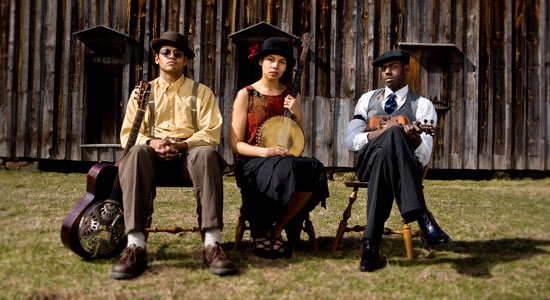 Miller: I recently had the great fortune to be a part of the Austin City Limits 80th birthday tribute to Johnny Cash. That night, after all the festivities wrapped up and Willie Nelson finally kicked me off his bus and drove away, I stayed up until five in the morning with a few friends swapping songs and stories and laughing like fools. One of these was a new friend, a fellow by the name of Dom Flemons. He is a member of an old-time string band from Durham, N.C., called the Carolina Chocolate Drops. He is also a bona-fide genius. His knowledge of the history of folk, bluegrass and traditional music would, alone, justify such hyperbolic descriptors, but when he opens his mouth to sing? Oh my goodness. Dom’s mimicry of the old-time singers is uncanny, and the original material he played us was downright gorgeous. I went out the next day and bought the Carolina Chocolate Drops catalog, only to discover that they are a wonderful band. The texture of the harmonies, the spirit of the playing and the songs selection all work to make a true one-of-a-kind group. My own earliest musical love was the corny but bad-ass folk music of the Kingston Trio, and Dom and I had a long, unexpected conversation about our mutual admiration for the much maligned trio. I look forward to the next time I can wander the streets of a sleeping city and sing “Scotch And Soda” with the great Dom Flemons. “Oh me, oh my, do I feel high,” indeed!”