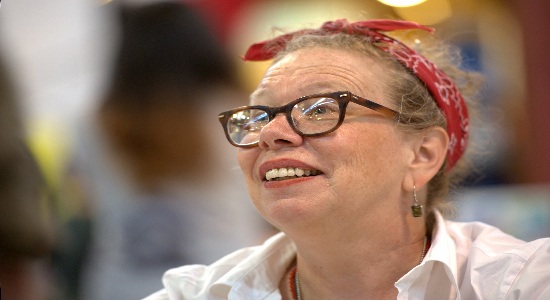 Hogan: Oh, Lynda Barry! How do I love thee? Let’s dig on the ways!

Do y’all know the work of Lynda Barry? Do y’all have her amazing books? No??? Well, can you please go get yourself some right now so I won’t have to bug you again?

I first got hipped to Lynda Barry in the summer of 1988 on the same night that I first heard Duke Ellington & John Coltrane’s version of “In A Sentimental Mood”—oh, what a night it was! And I fell into Lynda Barry’s work like I was doing the Nestea plunge. I dug into her stuff like a wiener dog going subterranean after a mole. Instinctual. No hesitation. The dirt felt soft and warm on my paws and the diggin’ was easy. I recognized the characters in Lynda’s books immediately, and I think they recognized me back. Somehow I knew they would never leave me hanging.

There were her new-wave eye-liner chicks in itchy-looking sweaters, waiting by the phone and gnashing their pointy teeth over hot Johnny Dowd-looking dudes who treated them like shit. I crushed on Rajoolio the Latin Lover, met a poodle with a mohawk, and saw lots of naked ladies, naked ladies! And then there were the kids. When I met Maybonne and Marlys and Arna and Freddie, it was all over. They were real. Real kids. They were me.

People always ask Lynda how is it that she can remember childhood feelings and language so perfectly? So perfectly painful and horrible and hilarious? She calls what she does “autobifictionography,” and it’s incredibly evocative work. The smell of burnt fried boloney in an aluminum pan. The ringing sound of metal skates on sidewalks, and the sting of skinning your palms on asphalt. The sulfuric perfume of busting up dotted red paper strips of pop caps with a brick on your stoop. Stinky wet bathing suits, snow cones, hickies, pixie sticks, school lunches, Red Rover, the funky chicken, Toni home permanents, Halloween, Playboy magazines—all this and more.

And also the darkness, the helplessness. That gaping helpless feeling that can be a big part of being a kid—a kid at the mercy of grown-ups—sometimes adults with sinister intent, but mostly just those who are just idiots or assholes with their own problems that might have nothing to do with you, but it still affects you in every way. That feeling of having no control over anything about your own life: “you can’t wear that,” “get upstairs right now,” “you look like a slut in that shirt,” “stop crying or I’ll give you something to cry about,” “pack your stuff, we’re moving,” “shut up!” That helpless invisible feeling of just trying to get someone to listen to you—to believe you—to actually see you.

Being able to look at Lynda Barry’s work and see yourself in the rearview mirror as the kid you were—and to see that kid in you now. To be able to feel the tumblers shift in the dead-bolt of your mind—to unlock some of your adult mysteries and habits and problems—and maybe even to help stop the perpetuation of physical neglect or emotional abuse from one generation to the next—that’s some Nobel Prize shit right there, people. And did I mention that her books are also hilarious?

Lynda Barry is still cooking with gas, man! She travels all over everywhere teaching an incredible class called “Writing The Unthinkable” (her book What It Is is kinda the recipe book for the class—check it out!). She’s got a great tumblr called “The Near-Sighted Monkey,” she sells her artwork on Etsy, and she’s also been teaching in Madison at the University of Wisconsin (“Professor Barry,” yeah!) The great Canadian company Drawn & Quarterly is publishing her entire back catalogue of work, as well as her new books.

There’s not enough time or space here to give you the whole Lynda story. This is just the tip of her iceberg, people! So y’all do yourselves a favor and get to know her work. She’ll save your life. She did mine.

3 replies on “From The Desk Of Kelly Hogan: Lynda Barry”

Lynda’s books always made me feel like I wasn’t so alone. A true story teller, Lynda’s books are the only ones that I hang on to.

I didn’t think I could love Lynda any more than I do. And yet somehow, seeing her grin from 1988 makes it possible.

My grandmother did that with cigarettes too. It’s funny…I had never heard anyone talk about that on television before…much more on Dave’s show.