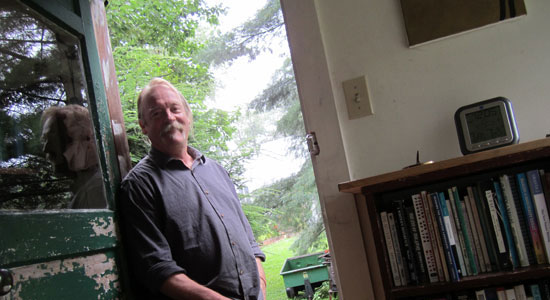 Stamey: In terms of recent novels that lock in to a rock-referential aesthetic, Telegraph Road by Michael Chabon stands out. Set in a San Francisco record store, it names obscure vinyl landmarks in a scattershot way that makes you want to hear each and every one. Chabon is a favorite writer of mine, a master of both the elegant sentence and the captivating plot. But there is another book that I’ve been drawn to recently, one without the fanfare of a Chabon, which also bounces off the rock life and kept me fascinated page after page: Life Among Giants by Bill Roorbach. Although set roughly in present times, it conjures up some of The Great Gatsby (and maybe a bit of The Maltese Falcon and early John Irving?). It follows the life and times of David “Lizard” Hochmeyer and his relationship with world-famous ballerina Sylphide, who lives in a mansion called High Side next door with a Sting/Bowie-like rock star husband. Early in the book, Lizard’s parents are murdered, and he unravels the plot against them over the course of decades, during which he becomes an NFL football player and then a restaurant owner. There is a We Are The World-styled charity concert with an A-list of participants. There’s a quality about the writing, a transparency to Roorbach’s craft, that lets you relax and enjoy the ride without thinking about the writer. Though not meta- nor postmodern, it requires a comfortable chair as you might be in it for hours nonstop. And (not to be a spoiler), in the end, it all hinges on a reel-to-reel tape and an old analog tape recorder. My kind of book.