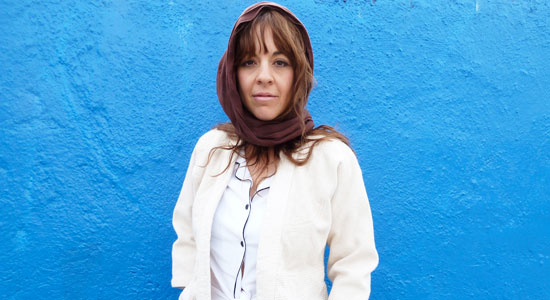 Los Angeles indie monarch Morgan Nagler of Whispertown (formerly the Whispertown 2000) has had her hat in the music ring for more than a decade now. Whispertown’s latest EP, Parallel (Acony), displays her progression as a songwriter, as well as her intrepid approach to a new sound, a quality that evades many artists. Because Nagler churns out such precious tunes, MAGNET had to assume that she has a stellar taste in music. Whispertown’s songwriter proved our assumption accurate by brewing up a 10-track mix tape titled Through Speakers for us. Check it out below.

Kim Deal “Dirty Hessians”
This gem of an epic vibe, from an angel here on Earth, sets the tone around the house acting as the theme song to your “post-work, I like washing the dishes” dreams come true. She has a new limited-edition seven-inch series, and this song is on the first one. Video

Haim “Falling”
These girls kill it. This is a live version of their soon to be released next single, “Falling.” I live in some version of a cabin-boat, fondly referred to as “The Shack,” where I worked on the lyrics with these three sisters for this one. Their live show is never worth missing, and I am dying to hear their full-length, which I assume will be out sooner than later. Video

Janelle Monáe “Tightrope”
It’s not new news, but listening to this song and watching this video are both highly satisfying and will put you in a good mood. I kind of want to watch it right now, even though I just watched it to make sure it was the right video. Although it may inspire me to never dance again. She is a badass. Video

Alton And Hortense Ellis “Cry Together”
Hortense Ellis has the rare gift of making you feel all things at once in every moment she sings. It never gets old. It’s timeless; she speaks and I open my own mouth. Video

Cat Power “Ruin”
This song serves as a 10 p.m. cocktail in a hot tub, a towel in the sun on a deck. This is much better than a cup o’ joe at hour five of an eight-hour drive. Video

Jonathan Richman And The Modern Lovers “Road Runner”
Whatever energy and wavelengths Jonathan Richman puts out there in the world, it’s medicine, like strawberry soda if it weren’t too sweet. It just makes things better by existing. Video

Jake Bellows “Meaning Wrong”
I guess I would want to marry Jonathan Richman if I wasn’t in love with Jake Bellows. He has a new tape that just came out called Help, only available online and at shows, which are amazing. It features an album track from his forthcoming release and an assortment of nine demos and b-sides that make me cry. “Meaning Wrong” is a demo he made with Todd Fink (Faint) in Omaha. His new full length, New Ocean, is set to come out late spring and will be his first official release post-Neva Dinova. He also plays in Whispertown when I’m lucky, and co-produced our latest EP Parallel, and that’s his voice on “Open The Other Eye.” Audio

Daniel Johnston “I Live My Broken Dreams”
Sometimes you just exist on the same plane with people and feel like you really understand something. This song has been a reoccurring dream. Is it always in my head. Video

Nik Freitas “Saturday Night Underwater”
His perspective is one you want to know. He has a new and amazing record about to be out in the world, which I highly recommend if you like good music. Once in Oakland, he and I were opening a Jenny And Johnny show when I heard through the speakers during his set,”You like it. It sounds good.” The man speaks the truth. Later that night our car window was smashed. Video

Benji Hughes “The Mummy”
The man’s first record is a double-record called A Love Extreme. And that it is. This is one of the most entertaining performers of our time. This is a live version. The song is the heighth and width of the party. It is the tragic undertone of a comedian with good humor. Enjoy. Video