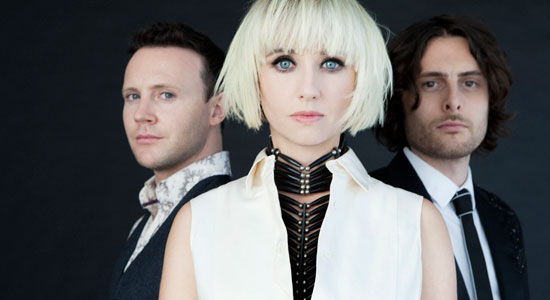 Ritzy Bryan is lost somewhere in America. This is nothing new for the diminutive, platinum-blonde powerhouse frontwoman of the Joy Formidable, but after two years of nearly non-stop touring, it’s still a bit unsettling.

“One of those waking-up moments when you go, ‘Fuck, where are we?’” she says. “Somebody told me we’re in Richmond, Va. It’s a beautiful, bright day.”

Living in the moment—and figuring out where you are when you get there—is something of a shared philosophy between Bryan and bassist Rhydian Dafydd, one that serves them well in advance of their now just-released sophomore album, Wolf’s Law (Canvasback/Atlantic). After a much-raved-about debut, 2011’s The Big Roar, and gigs that spanned from intimate clubs to opening for Foo Fighters and Muse, expectations from fans and critics are higher than ever. There’s also the dreaded specter of the “sophomore slump” that, clichéd as it may be, still haunts any band that’s found success straight out of the gate.

Yet Bryan—who speaks passionately and from the gut, unafraid to punctuate a thought with a little blue language for emphasis—isn’t worried about expectations. Any stress leading up to the release of Wolf’s Law is an internal force, she insists, one that’s essential for her art. “The only pressure that we ever put on ourselves is to write music that we can completely stand behind,” she says. “That’s just keeping yourself alive and excited and inspired by this band.”

The Joy Formidable’s roots reach back to 2007, when childhood pals Bryan and Dafydd founded the trio in their native Wales after a few starts and stops with other projects. Something about this version clicked, led by Bryan’s hard-driving riffs, sweetly-sung pop hooks and a mesmerizing Jekyll-and-Hyde stage presence that’s part dreamy songbird, part headbanging rock madwoman. The band’s first taste of the buzz to come arrived with its first single, “Austere.” NME spotlighted the song, but it was a fan-made video—headshots of folks pleasuring themselves—that earned a YouTube ban and put the Joy Formidable on the international radar. Still, even then as a yet-unsigned artist, Bryan made it clear that the music, not the expectations, was the priority. “Some bands think the record deal is the reward at the end of it all,” she told a Welsh newspaper. “But to us, it doesn’t work like that.”

Their major-label debut, The Big Roar, delivered on the hype, earning mentions on year-end best-of lists and praise from sources as diverse as The New York Times and Mötley Crüe’s Tommy Lee. Anchored by new drummer Matt Thomas’ metal-influenced rhythms, the album and the live sets that followed showcased a wide-ranging sound: orchestral touches, well-placed double-bass patterns and ambient guitar swells. With a minor alt-rock radio hit in “Whirring” that earned them a high-energy Late Show With David Letterman performance, the members of the Joy Formidable went from relative unknowns to mid-size club headliners in just a year.

Wolf’s Law is a different animal, and a far cry from the recording of The Big Roar, which Dafydd describes as “turbulent” and “claustrophobic.” For the follow-up, after building a collection of riffs, melodies and lyrics while on the road, the trio retreated to a lakeside cabin studio in Maine to piece it all together and enjoy the silence. “When you go to that sort of environment—Portland, January, very wintery—we felt very put off from the normal chaos of touring, the normal pace of life,” says Bryan. “It gave us a lot of time for reflection. We went into those sessions feeling very hungry to get back into the studio. There was a lot of energy, a lot of focus.”

Bryan and Dafydd stripped each song to its barest bones—vocals and acoustic guitar or piano—and built up from there, with no regard for categories or labels. “That’s the beauty of music,” says Bryan. “There are no rules. There are no limitations. If you have a very clear, defined voice and you know what it is you’re trying to say, then the genre, the sounds, the instrumentation—if you’re excited by it and it fucking turns us on musically, then you can turn your hand to absolutely anything.”

The result is a sonic step forward, with more emphasis on orchestration (both Ryan and Dafydd have classical backgrounds) and dynamics. “Silent Treatment,” a staple in their live encores last year, is unadorned, with only Bryan’s voice floating about acoustic guitar, while the title track builds to a churning swell of strings and guitars that falls just on the right side of the line between grand and grandiose. That tension between the floaty and the firm is borne of the band’s songwriting process. “We all challenge each other in a good way,” says Bryan. “There’s a creative pull and push to this band. It’s not nicey-nicey and content all the time. But at the same time, we’re a tight, respectful unit. Egos don’t get in the way.”

Dafydd, who cites Jimi Hendrix as his musical spirit guide, says he’s not concerned that the violins and delicate moments throughout Wolf’s Law will alter the band’s DNA. “Guitar doesn’t make anything rock ‘n’ roll,” he says. “It’s the attitude, you know? It’s not just the sound for us, either. It’s the message.”

The album’s themes are nearly as varied as its sound, starting with the title—inspired by a 19th-century medical theory that bones strengthen with use and atrophy without. That serves as a loose metaphor for the circle of life and the healing process, subjects Bryan wrestled with recently, as her parents divorced and her grandfather passed away during recording. “The Turnaround,” an aching ballad, is dedicated to his memory. “He was without a doubt our biggest fan,” says Bryan. “There was a real sense of, ‘Fuck! He’s not going to be around to enjoy it.’”

Another intimate moment is “Tendons,” which Dafydd says is the first time he and Bryan have written about their romantic relationship. It’s no valentine, with lyrics like “We clung onto each other/There was no one else around” and “Tendons that we are/Tendons stretched too far/Tangled up and heavy”—instead, it’s an exposed nerve, a mutual entreaty to appreciate this complex passion for their music and for each other. “It’s a really bizarre but really special relationship, and I’m proud of that song,” says Dafydd. “It seems to encapsulate this extraordinary friendship we have, and now we’ll look back fondly on that song, whatever happens.”

All of the raw emotion and the snowy solitude of Maine didn’t make Wolf’s Law a downer. Another standout track is “This Ladder Is Ours,” a buoyant anthem that serves to balance some of the album’s darker themes. “It’s a song of encouragement to somebody who feels they’ve lost their lust for life and has become numb to the world,” says Bryan. “It’s a plea to them to reawaken and make use of this time that we have. There’s the sense that time is precious and the time is now.” That spirit best sums up the space the members of the Joy Formidable occupy in this moment—not worried about the curveballs life and love have thrown at them, how the next single will chart or even where they’ll wake up tomorrow.

“It goes back to that thing of just playing the shows and throwing yourself into it, and committing to it completely or don’t fucking bother, you know?” says Bryan. “We’re not going to do anything half-assed.”