Time Stays, We Go (Pitch Beast)—the Veils‘ 10-track, fourth release—is both patiently restrained and wildly emotional. It’s full of lush brass and sing-along melodies, moments of surf-rock guitar and beachside ukulele, and essential personal queries within the struggles of the human endeavor. It’s a small dose of Pixies, and definitely reminiscent of Talking Heads, with a nod toward Jeff Buckley. In other words, Time Stays has a familiar quality despite its newness, and it’s instantly likeable, much like frontman Finn Andrews himself. Andrews and bassist Sophia Burn will be guest editing magnetmagazine.com all week. Read our brand new Veils feature. 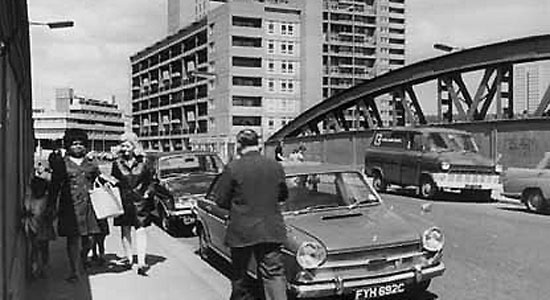 Finn: For as long as I’ve been making music in London, it has been in the shadow of the mighty Trellick Tower. The first time I remember seeing it was the day we first met up with (joint heads of Rough Trade Records) Geoff and Jeannette at their offices on the Golbourne Road, and I remember asking them what on earth that building looming over us was all about.

I think what continues to attract me to it now is that my love of the Trellick has grown steadily in tandem with my love of London. It first appeared to me, just as London did, a brutal, cold and intimidating place, far from the idyllic shores of New Zealand, where the houses were made of wood and had gardens and crazy shit like that. This was different. This was harsh, crowded and gloriously new.

I moved into a flat just around the corner from it, and it has dominated the view from my bedroom window ever since. I’ve an ever-growing collection of photographs of it from different angles and am always delighted whenever I get the chance to see it from a new point of view. When you see it from behind it really feels like you’re sneaking up on it. Because of its bizarre shape (ostensibly a concrete oblong with a distinctly canine looking head and tail), the angle you catch it at can dramatically alter its appearance.

I think it is much like London in the way that its character mutates so drastically depending on what part of town, what season and what mood you happen to be in. I heard the inventor of the paperweight lives up there. I really hope that’s true.