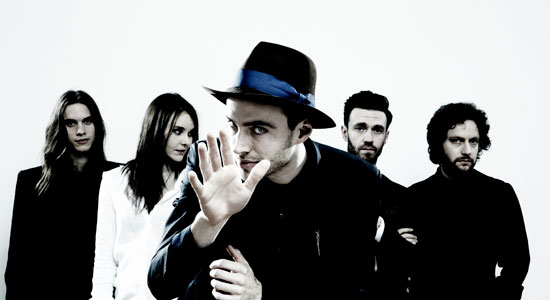 The Veils’ Finn Andrews never knows where he’ll go next

SXSW rages in the city around me as Skype trembles with Finn Andrews’ digitally warped sentences. My recording is a mess, and my notes sparse, but I’m left with a sense that the singer/songwriter behind the London-based Veils is that rare artist among rockers—a musician aware that his best songwriting occurs during his absence.

“I write a lot but it’s all generally just … um … shit,” Andrews says with a laugh. “The songs I ended up enjoying the most are the ones I don’t remember writing.”

Time Stays, We Go (Pitch Beast)—the band’s 10-track, fourth release—is both patiently restrained and wildly emotional. It’s full of lush brass and sing-along melodies, moments of surf-rock guitar and beachside ukulele, and essential personal queries within the struggles of the human endeavor. It’s a small dose of Pixies (“Dancing With The Tornado” remembers Frank Black’s vocals on “Mr. Grieves”), and definitely reminiscent of Talking Heads, with a nod toward Jeff Buckley. In other words, Time Stays has a familiar quality despite its newness, and it’s instantly likeable, much like Andrews himself.

The son of Barry Andrews, of XTC, he has spent much of his time “ping-ponging” between London, where his father lives, and New Zealand, his mother’s home, avoiding music until his teens, in part because of the environment he had been subjected to around his dad.

“There were always unwholesome, scary characters around the house,” says Andrews. “I didn’t want anything to do with it.”

Feeling like a foreigner in both homes, he says the music may have kept him grounded, tying him to his past and giving him a direction to pursue.

“I felt particularly childlike in music, and I thought that was because I started young,” says Andrews. “But I keep feeling that, and I’m surprised by it.”

Andrews repeatedly evokes the notion of the artist as conduit rather than creator—the urge to release the sculpture from the marble, as it were. It’s an urge often, um, veiled by the posturing and name-dropping that accompanies the average press kit or the concrete meadow of lanyards fluttering in the balmy Austin wind.

SXSW is the greatest media showcase on earth; it’s just a little overwhelming at times, and, at others, underwhelming. While the industry has produced many good bands lately, it has struggled to introduce a great band, at least to this listener.

While the Veils aren’t life-altering—like, say, Jeff Buckley or Radiohead—Time Stays does have time-stopping moments, despite the occasional cliché, such as “deep, dark woods” or “gather your rosebuds while ye may.” The latter—drawn from Robert Herrick poem “To The Virgins, To Make Much Of Time”—actually anchors the present against fears of black demise on “The Train With No Name.”

As Andrews himself heads into the dark tunnels of speculation that make up the industry around music, he carries only the desire to discover what he’s capable of.

“I never even remotely thought I would be doing what I’m doing with (music) now,” he says. “And I think that’s why I’m always sort of feeling I need to make another record and another—to learn more about it.”