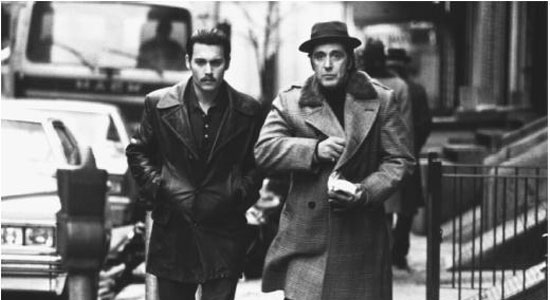 Four wiseguys are sitting in a New York cafe/bar arguing the merits of driving a Cadillac versus a Lincoln. “The Cadillac’s got more power. A Lincoln’s like driving a water bed,” says Lefty (Al Pacino). He asks the man seated next to him, “Who is that over there, the guy at the bar with the mustache?” “That’s Don the Jeweler. Jilly Four Eyes from Queens brought him around,” answers the man. “Is he a wiseguy?” asks Lefty. “No, he’s a connected guy,” is the reply. “If I had a thing to lay off, he could lay it off?” asks Lefty.

Walking up to the man at the bar, Lefty places a diamond ring in front of him and asks, “Are you Don the Jeweler?” After scanning it briefly, Don (Johnny Depp) puts the ring back on the bar. “Give it to somebody who don’t know any better, ’cause that’s a fugazy,” says Don. Lefty replies, “You looked at it for two seconds. I want you to middle a diamond for me. All I want from my end is $8,000.”

“Go ahead and try to sell it if you want to be a dunsky,” says Don. “You callin’ me a dunsky?!” demands Lefty. “Do you know who you’re talkin’ to, my friend?” Wising up to the situation, Don says, “I didn’t mean no disrespect,” as the bartender tries to defuse things by offering Lefty a spritzer. Don gets up to leave and Lefty barks, “Sit down! You gonna walk out on me? I walk out on you! You got a car?”

Ten minutes later, the pair drives to a bar at 23rd and Eighth. Lefty confronts a man in a flowery shirt who’s settled a debt with the bogus ring. “You owe me eight grand,” he says. Don chips in from the next table, “C’mon, you know what you did, pal.” Flowery shirt demands, “Who is this guy, Left? Don’t you tell me what I know,” he sneers at Don. “One of you’s gotta be wrong,” pronounces Lefty. “Lemme talk to this guy, Left,” says Don. “Go to the bar and have a drink.”

“Hey, I got a fuckin’ black belt!” warns flowery shirt. Within five seconds, Don pins him to a table and hisses into his ear: “This man’s gonna kill you. You got two minutes to figure a way outta this thing.” Flowery shirt begs, “I don’t wanna die.” “What kinda car you drive?” asks Don. “A Porsche,” he whimpers. “Yeah? Gimme the keys. Whose car is this now?” Don asks as though he was waving the pink slip. “It’s Lefty’s,” moans flowery shirt.

As they drive away, towing a silver Porsche Carrera behind Don’s car, Lefty says, “You scared that guy. I got 46 hits under my belt, and you’re the one he’s scared of.”