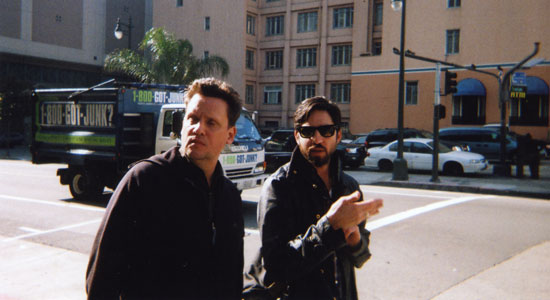 “I just like to work,” says Mark Kozelek. “I like to create and keep moving. Many of my friends have kids right now, and I see how hard they work, raising their kids. I figure, if they can do all of that, the least I can contribute in this world is staying busy with my music. I love creating. It’s when I’m most at peace and feel best about myself.”

Kozelek has been creating a lot recently, both under his own name and as Sun Kil Moon. (The line between his releases under the two names is notoriously blurry.) Last year, his Caldo Verde label issued Sun Kil Moon’s Among The Leaves, two limited-edition live albums, a tour documentary DVD and accompanying soundtrack LP. The first few months of 2013 have seen Like Rats, a provocative set of solo covers that includes Bruno Mars’ “Young Girls” and Dayglo Abortions’ “I Killed Mommy,” and two more live albums, and he’s at work on a new release with Desertshore, the band helmed by former Red House Painters guitarist Phil Carney.

But the most unique of all is Perils From The Sea, Kozelek’s collaboration with Jimmy LaValle of the Album Leaf. It’s a set of long, somber songs that melds LaValle’s spacious, orchestral electronic instrumentation with Kozelek’s forthright and world-weary vocals. They’re transfixing, often beautiful, sometimes unsettling.

The collaboration grew out of mutual admiration. Kozelek had seen LaValle play a few times, both in his old band Tristeza and the Album Leaf, and was impressed; and he is a fan, especially, of Torey’s Distraction, last year’s soundtrack album from the Album Leaf, although he confesses he doesn’t listen to much electronic music.

“I had been looking to co-write with someone, and I wanted someone outside of the typical songwriter context,” says Kozelek. “I didn’t want drums or bass or anything that I’ve already done a million times. Jimmy was exactly what I was looking for. I didn’t want to work with a band; I wanted to work with one person who could do many things. Jimmy was the guy, a very talented guy.”

For his part, LaValle has been a fan of Kozelek’s work going back to the mid-’90s. “I really connected to Red House Painters in ’96 when I was forming Tristeza,” he says. “Christopher (Sprague, of Tristeza) and I would stay up all night listening to Songs For A Blue Guitar and Nick Drake records. It really shaped the way I approached playing guitar. Lyrically, I was going through a break-up, too, so I really connected to a lot of songs from that record. I’ve always liked and admired the honesty of his lyrics and voice. Musically, there’s always a beautiful melody happening.”

Similar to the way Death Cab For Cutie’s Ben Gibbard and Dntel’s Jimmy Tamborello collaborated on the Postal Service album, Kozelek and LaValle did not work directly together; instead they emailed tracks back and forth. LaValle composed the music in Los Angeles and sent it to Kozelek, who would write lyrics and record vocals in San Francisco, sometimes asking LaValle to extend a track to make room for more verses to complete the story that Kozelek wanted to tell. They didn’t talk in advance to determine the sound of the album, but both were eager to experiment.

“I specifically remember Mark mentioning he wanted to be surprised,” says LaValle. “And I wanted to approach the music differently and uncomfortably, something out of my norm. With the Album Leaf, I just write whatever happens; if there’s room for vocals or I hear them, I add them. With this record, there needed to be space for vocals. So, I kept things simple between just a few synths. I used the same three synths as the foundation of the whole record. With the acoustic songs, I still kept the guitar playing simple.”

Compared to the density and grandeur of the Album Leaf, Perils is spacious and stately. “Gustavo” pulses steadily; “Ceiling Gazing” flows gently on a few hymn-like chords; “Caroline,” one of the few tracks that recalls, vaguely, the early House Painters albums, builds on a looped guitar pattern; “Somehow The Wonder Of Life Prevails” uses slow, sustained tones that provide a hypnotic, gradually deepening background to Kozelek’s 10-minute story of optimism in the face of conflict and disappointment.

Kozelek says that working with LaValle prompted him to sing in new ways, and that the experience was “very therapeutic.” His baritone is still instantly recognizable, but he sings with new cadences and some unexpected shifts to his upper register, as on the album’s perkiest track, “You Missed My Heart.”

“I learned that Jimmy can deliver music that inspires that hell out of me,” says Kozelek. “I really stretched out as a vocalist on this record. I was more free as a singer. I toured a lot last year, and it was great to come home, leave my guitar in the case and just put a mic up. My hands are tired after those tours. Jimmy was sending me pieces of music that were rhythmically very different than what I’d normally come up with, so I approached my vocals differently. I got into some rhythms and phrasing that were a lot of fun.”

Like most of Kozelek’s recent writing, the songs seems overtly autobiographical: warts-and-all stories of employing illegal immigrants to do home repairs, of receiving a wedding invitation from an unfamiliar relative that prompts ruminations about his grandfather, of difficult relationships with his brother, of life on the road. And they’re lengthy, often rolling along for seven or eight minutes, usually without conventional choruses.

The songs are very specific. Although many singer/songwriters sound confessional, Kozelek often comes off as if he is recounting a series of uniquely personal events: He’s in a plane traveling to a show in Tokyo; he’s opening mail at home; he’s walking the streets of San Francisco. On the other hand, the songs aren’t exactly introspective: They’re almost like journal entries, recounting a series of sharp, precise experiences. They captivate, in part because there’s a definite sense that they are clearly personal. Kozelek says he doesn’t worry about how the stories will translate into something accessible for a broad audience.

“I use a lot of references that I’m sure are lost on a lot of people,” he says. “But I don’t think there is anything wrong with a person being educated when listening to a song. I don’t like vague. Specifics are more interesting and colorful.”

But just as his work has in some ways gotten narrower and more personal, its scope has also grown, at least geographically. As he did on Among The Leaves, Kozelek uses his experiences touring the globe as fodder for songs.

“My world has broadened,” he says. “The longer you’re around, your scope gets bigger. As an example, there’s a reference to Israel in ‘Baby In Death Can I Rest Next To Your Grave.’ I had no concept of what Israel was like until I played there last year.”

Perils From The Sea broadens Kozelek’s scope, too. It’s an outlier in his prolific catalog, although he sounds perfectly at home in LaValle’s electronic settings.

“I like challenging myself, trying new things,” says Kozelek. “With each day that passes, there is more to learn and more to write about, more to reflect on.”

One reply on “Mark Kozelek & Jimmy LaValle: Two Men And The Sea”

Fantastic piece Steve, you really nailed the nuances of this incredible album. One month after discovering it I am still lost in its intricate hypnotic spells and charms.