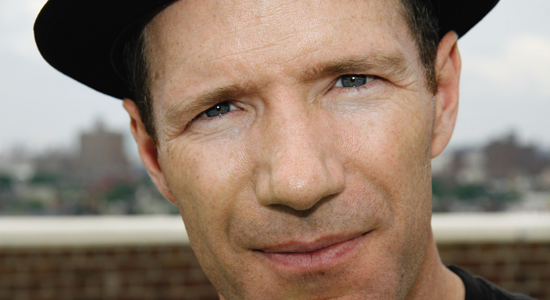 Artistic anachronism and writer’s cramp,  Rick Moody wants his work to save lives

Writer, singer, composer and poet Rick Moody first gained widespread acclaim with his 1994 novel, The Ice Storm, a portrait of dysfunctional suburban life that plays out over the course of a long Thanksgiving weekend. Director Ang Lee filmed it with Sigourney Weaver, Kevin Kline, Elijah Wood and Christina Ricci. In 1999, The New Yorker named Moody one of America’s most talented new writers, with a voice that constantly pushes the stylistic boundaries of modern literature. He has published five novels, including Purple America and The Four Fingers Of Death, three collections of short fiction and two nonfiction works, The Black Veil: A Memoir With Digressions and last year’s On Celestial Music: And Other Adventures In Listening. He also performs with the Wingdale Community Singers, an acoustic band that blends the sounds of old-time folk, gospel and bluegrass, with hints of rock and baroque chamber music to augment their arch, literary lyrics. Their most recent album is Night, Sleep, Death, released only on LP by Drag City. Moody will be guest editing magnetmagazine.com all week.

Some writers still use pencil and paper and typewriter. How do you approach the task of writing?
I am, as we speak, teaching at a college upstate (Skidmore), and in the room next to me, a distinguished writer of the generation ahead of me is holed up typing, and I can hear the keys in the morning. There’s something old world about that sound that I really love. However, I no longer have a typewriter. I do tend to print out a lot of hard copies of things I’m writing and work them over with a pen. It’s not all digital. I feel like I can tell when a writer has never printed out his pages in the finished book.

One of my writing teachers in college said that every writer has rituals they perform before they sit to write. Do you agree, and if you do, what are yours?
I almost always do the dishes and take out the trash, and sometimes I even vacuum first. I need to feel like things are more or less in order. This doesn’t seem ritualistic to me, but it might be neurotic.

Do you think books will go the way of LPs and CDs? What will that mean for the future of literature?
Books might very precisely go the way of LPs, if you mean that they will linger on for another generation as high-class collectibles for people who really give a shit about culture and appreciate objects. For example, me. Books truly will have to be pried from my cold dead hands. (And that’s a good metaphor, because books are far more dangerous than guns.) I’m not too worried about books totally disappearing, though I am often irritated by people who make elaborate claims for e-books. E-books represent a totally inferior reading experience in my opinion.

In the music business, the death of the majors created opportunities for young bands. What do you think the future holds for online literature?
Small presses, university presses, print-on-demand boutique presses, etc. There are many opportunities for people who care about literary stuff. I can’t really read online all that well. It bores the shit out of me. I don’t read most general-interest magazines either (just music magazines, actually, and the National Enquirer). I read books. A press like Archipelago, which is relatively young and which does mainly literature in translation, is right in my sweet spot. They make dazzlingly, beautiful paperbacks. I’ve loved every book that I’ve read from them, and will continue to do so. Small presses can take up this slack from the big five American publishers.

Your book of essays, On Celestial Music, covers a lot of ground, from the Velvet Underground to the Who and Arvo Pärt. Is there any particular genre of music you favor?
Not exactly. It’s easier to say what I don’t favor. I am not as interested in tropicalia as I should be (and I consider this a failing). I dislike contemporary country music though I love old time, and bluegrass, and classic country. I sort of revile anything torchy, such as you might find on American Idol or The Voice. I don’t really care about the R&B of the moment, although I love old-time soul music, and gospel, and jazz. I have a tendency to think that “dubstep,” a term that no longer means much of anything, is somewhat tedious. Everything else has something to teach me: Indian classical music, West African music, Irish folk music, Arabic pop, Bollywood, old rock ‘n’ roll, punk, no wave, downtown jazz, minimalism, experimental classical music, John Cage, early polyphony, and madrigals. Even some black metal.

Have you ever been a freelance music journalist? Where were the essays originally published?
Not in the sense that I tried to make a living at it. But I have published essays on music here and there over the years, and I have a regular column on music at The Rumpus. My pieces there are meant to start at 5,000 words. So I go long in that format. I have written a fair amount about music since the late ’90s. I had a piece on Salon about music recently. And I got paid for it. So I guess, in some senses, I am a freelance music journalist.

I like your exploration of the word cool, a word I also have trouble with, in its modern usage. Can you say a few words about its evolution for people who haven’t read the book?
Well, “cool” started in the jazz community and it meant to suppress feeling in an expressive way, perhaps as a way to avoid tipping off the cops, but later it came to mean just about anything that excited interest, at least until it became the ultimate word for marketing specialists. Now it is a totally dead word. It needs to be replaced. I suggest the word “fraught.”

You also sing and write songs. How does music influence your writing and vice versa?
Music, especially when played with other people, causes me to use my ears, and thus I listen better when I play music, and listening better causes me to write better sentences. So I think the influence of music on writing is in this way: Music makes the prose more literary. Literature influences the music, in that I can turn a decent line on occasion. I have no interest in songs that I write being lyrically weak, because the songwriters I most admire (Leonard Cohen, let’s say, or Joni Mitchell, or Townes Van Zandt, or Van Morrison, or Richard Thompson, or David Thomas, or Elvis Costello) aspire to a literary echelon with their words. I want to be part of that crowd, even if I am unable to do so, and the aspiration is good for me.

What kind of music does your group the Wingdale Community Singers perform?
Woebegone acoustic music with a slightly experimental edge, which could have been written 50 years ago.

How long have you been singing? What instruments do you play? Do you have the desire to continue to make albums as well as books?
I have already made any number of albums. Two solo albums, and three albums by the Wingdale Community Singers, almost all of these available through the usual channels. The most recent Wingdales album, Night, Sleep, Death, is, in truth, the cause of this interview. I have been in the studio. I have gotten better at being in the studio. I have played piano since I was 10 or 11, and I am self-taught on the guitar. I have sung since earliest childhood. Not that you can tell! But I do my best.

A recent article about your work was headlined with the quote: “I want my work to save lives.” Can you expand on that thought?
That’s a quotation from 12 years ago, I believe, although someone else may have dug it up recently. In any event, when I was a kid, songs saved me, many times over. Pete Townshend saved me on occasion. Todd Rundgren saved me on occasion. Neil Young saved me on occasion. Elvis Costello saved me on occasion. Patti Smith saved me on occasion. My engagement with literature has also sometimes had this intensity to it. To The Lighthouse or Moby Dick or, more recently, Don Quixote or The Divine Comedy. They have all made life more palatable. I just want to make work that is that generous and that comprehensive, whether in song or between covers. Occasionally, you have to ask yourself, “Why do this?” And that is the answer for me. To try to save lives.

Do you write all the time? What are you working on now?
I try to write all the time. Right now, I’m working on this interview. And a novel and a whole bunch of essays and some stories and some poems about the American presidents, and I have an idea about a play. And there are a couple of songs in states of undress, too.