It’s difficult to imagine anyone left on the face of the planet (already familiar with the man’s work, that is) who isn’t aware that singer/songwriter John Wesley Harding and critically acclaimed novelist Wesley Stace are one and the same. Henceforth, he has announced that he will record under the name Wesley Stace, and hopefully never again be asked why he assumed the name of a 1967 Bob Dylan album, misspelling and all. “It’s like what happens at the end of a Spider-Man or a Batman movie,” says Stace. “When the superhero reveals his true identity to his girlfriend.” “Girlfriend” may be the operative word on Stace’s new album, Self-Titled (Yep Roc), in which a 47-year-old man, now comfortably married and living in Philadelphia, reflects back over the loves of his younger life. Stace will be guest editing magnetmagazine.com all week. Read our new feature on him. 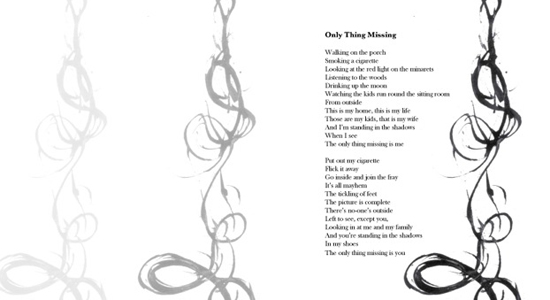 Space: I don’t like lyrics printed on album sleeves—never have. (I used to read them before I even got to listening to the record, which was counter-productive to my ultimate enjoyment.) Only once did a record company talk me into doing this, and I regretted it.

However, I love lyric books, particularly illustrated ones, and I was thrilled when Yep Roc suggested we put one together for Self-Titled. Above is a spread from the book.

My entry-level “illustrated lyric book” was, of course, Writings And Drawings by Bob Dylan, and I’ve been collecting them ever since. Here are two recent finds.

The first is a real beauty, published by Bongi Books in 1976. It features the poetry, as opposed to the lyrics, of Zombies Rod Argent and Colin Blunstone, the poetry of David Jones (who I believe put the book together) and, most importantly, of Duncan Browne. These poems/lyrics are otherwise unpublished, allowing the intriguing possibility that one could put them to music and therefore “co-write” a song with Duncan Browne, one of my all time favourites, and a singer/songwriter whose name is heard much more nowadays than it used to be. I recently found a beautiful copy of his first record in Princeton Record Exchange for $14!