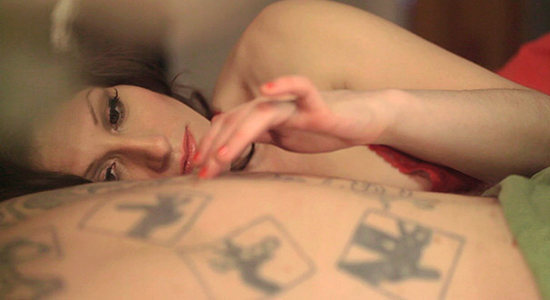 Sasha Dobson has been a standout vocalist on the American jazz scene for some time, but has just recently released her first album as a songwriter, Aquarius (Creek Valley). After time spent booking gigs in dive bars and pool halls with friend Nora Jones, and eventually joining Jones’ band, Dobson decided to channel her jazz roots into what would become the raw and compelling Aquarius. The album was produced by friend and collaborator Joel Hamilton (Sparklehorse, Black Keys, Tom Waits), who seemed to be the only person to be able to understand what Dobson wanted and fought against turning it into a jazz or country record. Watch the video for “Full Moon” below, and check out the mix tape she and Hamilton made for MAGNET.

Jorge Ben “Cinco Minutos”
Dobson: Some of my favorite music in singing and playing. You don’t need to know Portuguese to know what the music is about. Deeply emotionally driven.
Hamilton: This song is a classic example of the gesture reading louder than anything. There is a solo cello part that rips my heart out every time. Video

Sparklehorse “Apple Bed”
Hamilton: I recorded this one. The general mood is so heavy. Mark was such a thoughtful guy. Video

Tom Jobim And Elis Regina “Só Tinha De Ser Com Vocé”
Dobson: Killer groove, simplicity around the vocal, unstoppable collaboration. A pair that have always hit my heart in what they did together. Video

Notorious BIG “The What”
Dobson: Again, simplicity around the vocal. Lyrics and rhythm to the core. BIG was undeniably beyond his time. Like Brazilian music, I migrate toward circular chord structure. Video

Swans “Can’t Find My Way Home”
Hamilton: The Jarboe-era cover of a classic Blind Faith song. Spun toward a goth edge, it really speaks to me. Video

Pete Rock And CL Smooth “They Reminisce Over You”
Hamilton: Classic era of hip hop. This track just hits me so hard every time. I get the chills. Video

Heatmiser “The Fix Is in”
Dobson: I am a gigantic fan of early Elliott Smith; also I love the instrumental line that keeps returning. A lot. Video

Scott Walker “Two Ragged Soldiers”
Hamilton: Scott 3 and Scott 4 are just incredible records. The general mood of this stuff … It’s just so melancholy and bizarre, but with lyrical content that drags me along. Video

Shocking Blue “Daemon Lover”
Dobson: Hilarious and completely classic. Inspiration to the way I wanted to feature the vocal on my own record. Video

Donovan “Get Thy Bearings”
Hamilton: This is a groove that happens when great players support a great singer. I love this track. Video

David Axelrod “The Human Abstract”
Dobson: Undeniably badass arranging and writing. David Axelrod is someone Joel just tuned me on to. Fully immersed. Composition.
Hamilton: David Axlerod is probably one of my biggest influences as a producer at this point. Amazing timbres and arrangements. Video

Load Stone “Flower Pot”
Hamilton: One of the best stoner grooves of all time. By far. So deep. Feel this one. Really. Video