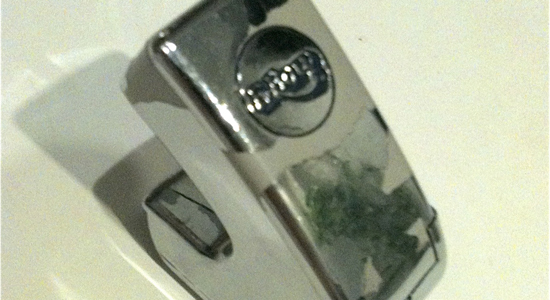 Barone: I was always looking for ways to get more sustain from my guitar. I think the first time I thought about it was when I heard Randy Bachman’s fluid signature solos on “American Woman” by the Guess Who, which I adored as a kid barely able to play chords. Then came Robert Fripp’s awesomely sweet sound, especially his work with Brian Eno such as on No Pussyfooting and Another Green World. I wondered how those guitarists could get such smooth, endless tone without too much fuzzy distortion. Apparently, they got their sound with effect pedals and/or extreme volume through large amps, but I was looking for something a bit more subtle. By the time the Bongos got together I asked around and began hearing rumblings about a Gizmotron guitar effect (designed by 10cc’s Godley and Creme in the early ’70s), but that required a permanent installation on the guitar that, since I had only one guitar, I was unwilling to do. Then I heard about the hand-held EBow, or Energy Bow that, like the Gizmotron, had been invented more than decade prior. Designed by young Greg Heet in California in 1969 (I always imagine him like a young Steve Jobs inventing a computer or Jan & Dean making surf records in their parents’ garages), the EBow creates a bowing-like effect using a magnetic field that reacts with the guitar strings and pickup. I must have gotten my first generation chrome EBow in 1983 after we made Drums Along The Hudson but before we recorded for RCA. It has no on/off switch, no settings. Just a 9-volt battery and a red LED that lets you know it’s on. And boy, you know when it’s on. It blew me away when I first heard it on my Rickenbacker. It completely changed the nature of the instrument. I had always really wanted that guitar to sound more like a Les Paul, and now it kinda did. We used it on “Numbers With Wings,” and I know it was a big part of the success of that track and many, many tracks since. I still use my original one. Badly chipped and bruised, it’s been dropped, stepped on and flung across stages all over the world, just like its owner. And yeah, like him, it still works pretty good and comes back for more.