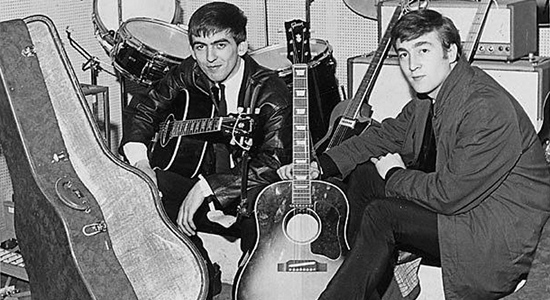 Barone: The last time I was guest editor of MAGNET, in 2010, I wrote an article about Gibson‘s digital Les Paul, the HD.6-X Pro, and their “technology” guitars. Since then, they’ve released the Les Paul X, which has robot tuning and 55 amazing pre-set sounds you can edit right on the guitar, not to mention wireless Bluetooth effect pedals. It is literally awe-some. But this year I’ve been out on the road a lot, playing solo in clubs and, getting down to basics, the guitar that gets me through every song every night is my Gibson J-160E, John Lennon model. Originally released in 1954, the J-160E was one of the first “electro-acoustic” guitars with a built-in P-90 pickup (same as on my 1955 Les Paul Special) and a unique construction that doesn’t allow for the same kind of resonance and vibration as a “normal” acoustic guitar, to avoid feedback. It’s tighter, with ladder bracing behind the top, and sounds more like an electric guitar. Maybe it’s because of my love of misfit instruments, but I love this guitar. It’s only recently I realized that on the early Beatles records, John and George are often playing these instruments plugged into Vox amps, not necessarily the electrics I imagined. And John played it for the entire Beatles career, from 1962 on. The same guitar, even on his first solo single, “Give Peace A Chance” (he had it sanded down from its original sunburst finish). The guitar uses a primitive electronic set up really, not remotely high-tech or modern. When I do my soundcheck, sound dude often has to fiddle with the tone; the J-160 seems to be both brighter and darker than a normal acoustic guitar. I play through an amp onstage plus give him a direct signal to work with, so there is a lot of sound, and by showtime, the thing rocks like a monster. Sound dude is blown away. Just me and my J-160E, and the sound fills the house. I couldn’t do that with any other guitar.