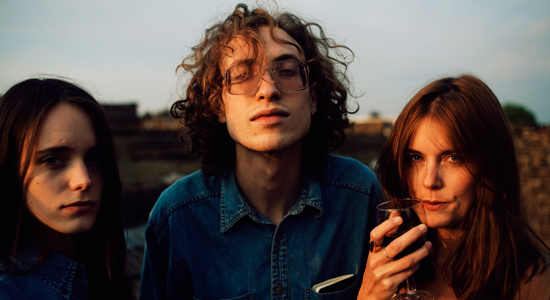 Ex-Yuck frontman Daniel Blumberg starts over yet again with the restless, yearning Hebronix.

Rolling out of bed after making music until four in the morning, Daniel Blumberg scans his schedule of interviews, finds my name and remembers the important part. “Is it Herbowitz?” he asks somewhere in Denver, where’s he about to record his second album as Hebronix.

“Yeah,” he says. “I saw that name, and I was like, ‘I bet he’s going to ask about the Jewishness of Hebronix.’ Because I thought, ‘Oh, God, that’s going to be the first question in every interview, and I’m not going to know how to answer it, and why did I decide on the name?’ But it hasn’t come up, and I’ve been happy it hasn’t come up. Then I saw your name, and I was like, ‘We’re going to have a nice conversation about Judaism.’”

So, we do—well, sort of—in between questions about Unreal (ATP), his first Hebronix album since leaving Yuck, the band he fronted from 2010 to 2012, when he quit “work on other things.” Now that it’s released, we can understand why he left. Produced by Neil Hagerty (Royal Trux, Howling Hex), Unreal isn’t Yuck, and it isn’t supposed to be. The clouds of guitar noise that saturate the album are quieter, moodier, more unsettling; the singing wearier, stretched thin as an old E string; and the songs more introspective, turning inward with lines like, “I’ve got some things to do/Some private things to do” and “I’m thinking about things/I already know.”

It’s dark, swirling, cerebral music that’s inescapably lonely, restless, yearning, adrift in melancholy—in a word: Jewish. But Blumberg—who grew up attending cheder, the Jewish version of Sunday school (where he met Max Bloom), and visiting a kibbutz in Israel (where he met Jonny Rogoff)—says he doesn’t hear the connection, even though the album’s first video shows a group of Hasidic Jews driving a truckload of amplifiers through his neighborhood. “It’s weird, because I made it six months ago … so I’ve lived with it a bit … and I’m trying to remember what I was thinking at the time, but nothing is springing to mind,” he says, pausing to refill his first cup of coffee.

“Going into the studio with Neil, it’s difficult to gauge what the result is going to be. That was the case with the album, especially because the songs are very long, and we were working quite fast, all in two and a half weeks. We didn’t sit down beforehand and say, ‘Today, we’re going to do this.’ A player would start, and maybe the harmony would come first, on saxophone, so I wouldn’t initially recognize it, and then the guitar parts I’d written on the four-track would emerge, and the melody, and I wanted Neil to have the freedom to arrange and be instinctive, to feel like it was his record as well. And it was exciting, not knowing, not being in control.”

By Blumberg’s count, Unreal is his fifth consecutive debut album in the last six years. First, there was Cajun Dance Party’s The Colourful Life (2008), begun while he and Bloom were 15 years old. (“It was absolutely terrible,” says Blumberg. “No, I think I’m just getting past the point of being embarrassed—I think it’s great.”) A year later, as Daniel In The Lion’s Den—an Old Testament reference he thinks is “very Christian”—he completed a self-titled album with members of Lambchop, but couldn’t escape his old recording contract. (“The album didn’t ever come out,” he says. “Well, by the time I managed to get it out in Japan—you know, legally—I just wasn’t interested anymore.”)

Next came 2010’s Yuck, arguably the best indie-rock album of the year. (“We were 19 when we started the band, and I was having lots of fun, you know, living at home, smoking weed, getting high,” he says. “Then I moved out and we started playing lots of shows … and going on tour for a very, very long time … and playing those songs over and over again … and then I came home.”) Between tours, Blumberg started a label, Boiled Egg, to distribute his drawings and musical side projects, including 2011’s piano-driven Forget, backed by his Lambchop friends and credited to Oupa, which is Afrikaans slang for “old man.” By then, after numberless performances of “Get Away” and the boredom that came with them, Blumberg was glad to get away from the band, and it was only a matter of time before Yuck formally announced its return to the studio without him.

“The idea of performing the same thing every night seems strange to me at the moment,” says Blumberg, who’s planning to play only a handful of shows in 2013, with the next one scheduled for November. “It’s a weird thing with music: the performance aspect and the writing aspect, and the fact that most artists play live, just by default. From the business perspective, it’s quite clear—it’s a way for musicians to make money. But I’m not sure I quite understand it as a process at all; it seems a bit bizarre.”

He’d rather record something new, which is why he’s in Denver, staying at the home of Charles Ballas, who plays (uncredited) keyboards on Unreal and has been working on electronics for the upcoming sessions with Hagerty. He’d rather talk about something else, like the video he shot for “Viral” a few days earlier, when he ate “hundreds and hundreds of eggs” and watched Nastassja Kinski’s daughter dance around the director’s house. But mostly, he’d rather draw, which he calls “the most satisfying thing that I do.”

Blumberg draws every day, filling a new notebook every two or three days, when it becomes time to start another. He draws at home, he draws on the road, he draws in the studio; and one of the things he loves about drawing, and why it feels so meditative, is that “it doesn’t involve language. I mean, it is language in a way, but it doesn’t involve words.”

For the cover of Unreal, he’s chosen a drawing of two genderless naked figures, one sitting on a motorcycle, kind of, while the other—which only has half a body—floats in mid-air. Or maybe it has a wheel instead of legs, and there’s a diagram of motorcycle handlebars in between, with arrows leading to the different parts. He wanted “some sort of machinery involved in the cover,” because that’s how the album feels to him, and because he felt the picture somehow fit the name Hebronix.

“I’m not that interested in the process of dissecting … I think it would … well, it’s always felt slightly unnecessary to … footnote the lyrics or the drawings,” says Blumberg, with the sound of birds singing in the background. “It’s weird with names, I’ve been doing this for eight years, since I was 15, and I’ve had quite a few different names. One of the big things for me was that Hebronix worked nicely with my drawings. I had it written next to one of my drawings, which is important to me because I use my drawings for my albums … So, there’s no real serious connection to Judaism. I guess it was a bit of an homage to Silver Jews, though that’s not a very interesting story about the name, unfortunately … It’s not something that I’ve thought about; it’s been more of … an experience, where I’m still learning. It still feels quite new, making records, and the ones I’ve made, I guess I’ve approached them with … curiosity.”