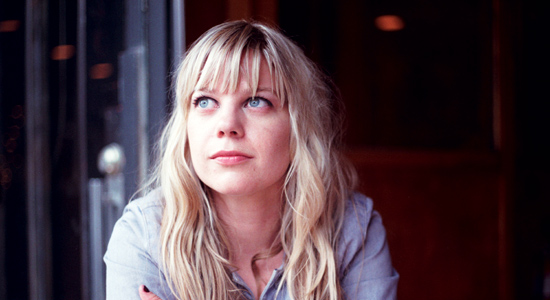 Toronto folk singer Basia Bulat raises the ante, and the dynamics, on her third album

From London, where she’s been doing promotion for Tall Tall Shadow (Secret City), Basia Bulat sounds the kind of nervous that’s mostly the result of unexpected good fortune. “The response has been kind of overwhelming,” she says a handful of times, as if she’s not quite accustomed to it yet, as if it’s come as kind of a shock.

The reaction to the album, Bulat’s third full-length, has indeed been exceedingly positive, a happy circumstance for a performer who made her thus-far moderate fame on the folk singer/songwriter circuit and is now looking to switch things up. Bulat’s first two albums, adept enough affairs, traded mostly in the light arrangements and soft dynamics of contemporary folk music. If her talents extend beyond many of her peers (notably her staggering facility on a wide range of stringed instruments from the dulcimer to the charango), her aesthetic palette as presented on her first two albums was largely traditional.

Tall Tall Shadow, by contrast, opens with the stomping, gradual crescendo of the title track, an immediate announcement of increasing speed and volume that sustains for the rest of the record. It’s a sonic gamble for Bulat, who for the first time finds herself pushing her aesthetics into more energetic territory. Still, the song structures and modes are of a piece with her previous releases, making Tall Tall Shadow a furtherance rather than a divergence from her previous work.

“I do think (the new album is) a development, as opposed to coming straight out of left field,” she says. “The thing is, now, I wish I’d gone even louder. I was playing around with sounds I’d been a little apprehensive about before, but at a certain point I thought, ‘What am I afraid of?’”

Good question—particularly in the context of the folk-music scene, which can be notoriously unforgiving of volume and speed. For this album, Bulat found herself pushing her comfort zone lyrically as well, writing songs that were much less narratively straightforward than those on her previous two full-lengths. It was an approach that threw her into a writing style that was less cozy, but ultimately more challenging and interesting for her.

“I think you can’t really help when things hit you, and it begins to feel like something’s chasing you down,” she says. “Where you can’t help getting it down on paper or canvas or tape. I used to hear people say about their own writing, ‘I don’t know what that song is about.’ And I’d think, ‘Oh, that’s crazy.’ But I’ve realized that’s actually a very honest admission. Personal songwriting is all I really know how to do right now—that’s what I’m drawn to. And I guess singer/songwriting has always been associated with the personal. But it doesn’t have to be that way. I thought of these songs more like the roman à clef, that kind of approach, where you don’t always know the difference between what’s made up and what’s the truth. And as I went a little more inward lyrically, it seemed like a good idea to go outward, sonically.”

It’s that blend—the increasingly lyrical, sometimes ornate narrative approach and the new directions in arrangement and performance—that makes Tall Tall Shadow a step out of the box for Bulat. It’s less a folk album, even a folk/rock album, than an LP on which folk and rock are the starting points for odd directions and developments.

And when talk turns to her sequencing and arrangement choices, Bulat brings in some surprising but, in retrospect, clearly audible reference points: “You can’t help but be influenced by the things you love,” she says. “And the stuff that I love, the music I listened to when I was a kid, is stuff that frequently showed that kind of attention to sequencing. I love those albums, like those old Bruce Springsteen records, the ones that have those power starts and power finishes, but move around dynamically in the middle.”

To consider the softer side of things, take “It Can’t Be You,” which falls a little short of midway through the record. A skittery, spidery fingerpluck run on the charango propels the song, while the lyrics circle endlessly around an abstract, first-person account of love and betrayal (“I never dreamed that you would be the one/To shoot me down so sweet/No no, no no/It can’t be you/It can’t be you”) without ever coming to a revelation of the specifics, returning again and again to a chorus that’s simply Bulat vocalizing on the closing vowel, so that the “you” morphs into a high lonesome wail skating the string melody. (“It’s a song with a single sound for the chorus,” she says self-deprecatingly. And she’s right, but it’s also chilling, haunting in the best possible way.)

This is the connection the strongest songs on Tall Tall Shadow have with the folk tradition—the belief that the power of a story inheres not in its cold facts, but in the voicing of powerful emotion, even if the words seem cryptic set down in cold type. The words are only the beginning of the story; the moan, the joyful shout, the delivery take us the rest of the way.

What we’re talking about is really a non-quantifiable element, the result of a decision to approach the music in a way that ensures something beyond a simple document of the right notes in the right order. Though there are many paths to that destination, for Bulat the key was immediate collaboration. At one point in the conversation, she recalls watching footage of the recording sessions for Elton John’s Goodbye Yellow Brick Road and being struck by how the musicians gathered in a single space, sometimes around a single microphone, to make that expansive sound happen. It’s an approach she used often on Tall Tall Shadow, notably on “It Can’t Be You,” whose cold, wide echo isn’t a produced effect, but the result of a single instrument playing in a cavernous studio space.

“I’m still drawn to that element—that ‘live’ element,” she says. “I used to listen to a lot of oldies growing up. So much of that stuff was recorded that way, all of the players together. It’s still present when you listen to those songs today. I mean, there has to be a reason people still love Motown, those Stax Studios records, field recordings. You feel like you’re in the room with those people. You feel that urgency.”

Bulat’s journey is one on which she’s kept a lot of friends close—her brother Bobby plays drums on the album (as he did on 2010’s Heart Of My Own), and part of her time in London will be devoted to planning the filming of the title video for Tall Tall Shadow with visual artist Stephanie Comilang, with whom Bulat collaborated on an installation piece for the Art Gallery of Toronto in January. Even the cover art of Bulat’s new album, which cheekily references Joni Mitchell’s Blue (but also, as she rightly points out, Nico’s Chelsea Girls and even Elton John’s self-titled 1970 album) suggests the tradition she’s trying to work in, a long history of artists whose careers have drawn from traditional forms, even as they’ve pushed against the confines of them. And like many of those artists, she’s begun to find that leaving the established territory behind has pushed her into less well-charted, but perhaps more productive terrain.

“I think the reasons for making the record, the reasons I was writing these songs, seemed to reflect a state of mind that changed for me throughout the day,” she says. “I’d find myself powering through things, then needing to stand still for a while. I spent a lot of time sequencing this album—even in lyrical terms, I wanted it to make sense from start to finish. But the things that I really want to say, I can’t really ever say them properly. Maybe there aren’t really many words to say anyway. That’s the funny thing: What you hear in music usually depends on what you’re listening for. Sometimes it’s the only place where I really feel like myself.”