The reaction to Tall Tall Shadow (Secret City), Basia Bulat’s third full-length, has been exceedingly positive, a happy circumstance for a performer who made her thus-far moderate fame on the folk singer/songwriter circuit and is now looking to switch things up. Bulat’s first two albums, adept enough affairs, traded mostly in the light arrangements and soft dynamics of contemporary folk music. If her talents extend beyond many of her peers (notably her staggering facility on a wide range of stringed instruments from the dulcimer to the charango), her aesthetic palette as presented on her first two albums was largely traditional. Tall Tall Shadow, by contrast, opens with the stomping, gradual crescendo of the title track, an immediate announcement of increasing speed and volume that sustains for the rest of the record. It’s a sonic gamble for Bulat, who for the first time finds herself pushing her aesthetics into more energetic territory. Still, the song structures and modes are of a piece with her previous releases, making Tall Tall Shadow a furtherance rather than a divergence from her previous work. Bulat will be guest editing magnetmagazine.com all week. Read our new feature on her. 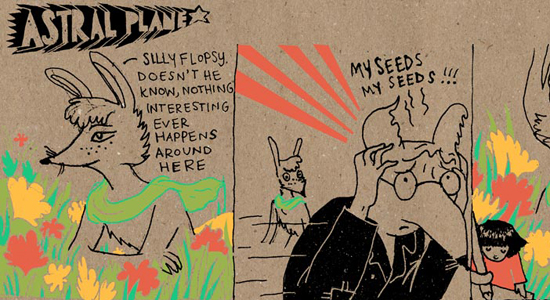 Bulat: I live in Toronto, Canada, and like many who live here, I adore the work of visual artist Roxanne Ignatius. Although she first gained renown in the city for her posters for the Silent Shout electronic-music series, her art takes many forms ranging from children’s book illustration to murals to textile installations. Her work is both whimsical and futuristic and her latest endeavor is a webcomic called Astral Plane. I hope you’ll like it as much as I do.