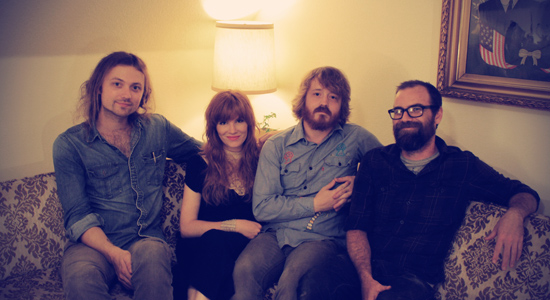 Nearing their 10-year milestone as a band, the Parson Red Heads set to work on their third album, Orb Weaver, with the goal of capturing the energy of their live shows in the studio. One song that didn’t make the final cut, “State Lines,” melds ‘90s lo-fi guitars with a ‘60s pop/rock feel. Says Evan Way, “‘State Lines’ is a song that has been around for years—I wrote it in L.A., and we’ve been playing it live off and on for probably five years or so. Just never had the proper album to include it on. It was definitely the right fit for Orb Weaver—it’s an upbeat rock song, with a Who-ish sort of main guitar riff, with a long jam outro built around a drone on D—definitely goes into some Yo La Tengo territory at the end. Sadly, we couldn’t include it on the record, it being a long song. The album already has a few five-minute-plus songs on it, so we decided to keep it off. But it’s a long time staple of our live show, so hopefully some people will be excited to finally have a properly recorded version of it.” We are proud to premiere the previously unreleased b-side today on magnetmagazine.com. Download it below.