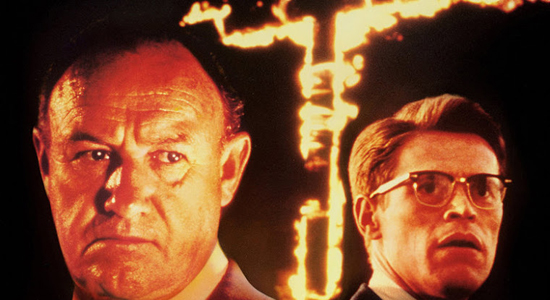 Three young civil rights volunteers, one black and two white, are driving through the Mississippi countryside late at night in the summer of 1964 when they are suddenly followed by a pickup truck.

“What the fuck are these jokers playing at?” says the young driver as the truck rams into their rear bumper. “Oh, they ain’t playin,’ you’d better believe,” says the black volunteer in the back seat as a red light goes on above a second vehicle behind the truck. “Shit, it’s the cops,” says the driver, pulling onto a side road and stopping. “You had us scared to death, man,” says the driver to the scowling person pointing a flashlight in his face. “Don’t you call me ‘man’!” says the man with the flashlight. “No, sir. What should I call you?” replies the driver. “You don’t call me nuthin,’ you nigger-lovin’ Jewboy!” he replies, putting a pistol to the driver’s temple and blowing his brains out.

Weeks later, two FBI agents assigned to investigate the disappearance of the three activists are driving toward Jessup County, Miss. Thumbing through a background file, agent Rupert Anderson (Gene Hackman) discovers a piece of racist sheet music and starts serenading the driver, agent Alan Ward (Willem Dafoe): “Will this battle be lost by mixing the races?/We want beautiful babies, not ones with brown faces/Never, never, never I say/For the Ku Klux Klan is here to stay.”

Anderson, a former Mississippi sheriff, chuckles over the pig-ignorant lyrics, but Ward, 25 years his junior, is not amused. “They put me in charge here because I’ve been through this before,” he volunteers. “Birmingham? Montgomery?” Anderson asks. “Oxford. I was with Meredith at Ole Miss,” says Ward. As they pass a highway billboard proclaiming, “Welcome to the Magnolia State,” Anderson asks his partner, “What has four eyes and can’t see?” “What?” asks Ward, already grinning. “Mississippi,” laughs the older man.

“I’m Alan Ward with the FBI,” says the agent to a deputy at the Jessup County sheriff’s office. “Federal Bureau of Integration?” smirks the deputy (Brad Dourif). “We’re here to see Sheriff Stuckey,” says Ward. “Sheriff’s right busy. You’ll have to come back some other time.” Ward smiles, “We’ll wait.” Anderson strolls over to the deputy, sits on his desk, and quietly says, “Listen to me, you backwoods shit-ass. You’ve got about two seconds to get the sheriff out here, or I’m gonna kick the god damn door in.” Just then, the sheriff appears. “Looks like we got some Hoover boys down to visit. You here to solve our nigger problems?” asks Stuckey (Gailard Sartain). “Just a missing persons case,” says Anderson. “Actually, it might be more serious than that,” adds Ward. “I don’t think so, boy,” says Stuckey. “I think it’s a publicity stunt cooked up by that Martin Luther King fella.”