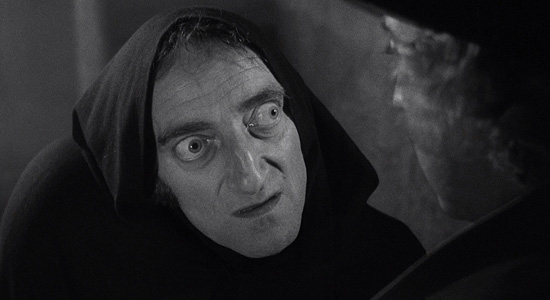 Funny how it turns out that there’s usually one top dog for most of the male leads in major comedies of any particular era. Sometime in the last 10 years, the baton was passed from Jim Carrey to Steve Carell. Back in the ’70s, that man was Gene Wilder, whose eerily pleasant exterior revealed just a touch of madness. Unlike the recent Michael Jackson-enhanced version by Johnny Depp, Wilder’s Willy Wonka looked fully capable of disposing of naughty children in a permanent fashion rather than luring them into his house.

Mel Brooks’ Young Frankenstein opens with a pounding rainstorm and ear-splitting thunder rolling over an ancient castle high on a hilltop. Before a roaring fire, the recently exhumed coffin of Baron Von Frankenstein has been opened to reveal a badly decomposed corpse with a death-grip on a metal box containing the last will and testament of the sarcophagus’ occupant, Victor Frankenstein.

A professor in an American medical school lecturing on the central nervous system asks for questions from his students. “I have one, Dr. Frankenstein … ” begins a waspish young man. “That’s ‘Frahnk-en-shteen,'” corrects the doctor (Wilder). The student continues unabated, “Aren’t you the grandson of Dr. Frankenstein who went into graveyards, dug up freshly buried corpses and transformed dead … ” “Yes! Yes, yes,” interrupts the lecturer. “We all know what he did. But I’d rather be remembered for my own small contributions to science and not my relationship to a famous .. .cuckoo.”

Nervous laughter ensues as an orderly wheels in an old man on a gurney. The doctor demonstrates the difference between voluntary and involuntary nervous responses by asking the man to raise his left arm. “That was a voluntary response,” notes the doctor who then knees the old-timer in the groin. “And that was an involuntary response.” The old man groans and clutches his tender parts, and Frankenstein tells the orderly to pay him an extra dollar. As the class bell rings, a man dressed as someone from a ’30s horror film approaches the lectern and hands the doctor the box containing the will of his great grandfather.

Weeks later, Frankenstein rolls down a train window and hails a young lad on the platform: “Pardon me, boy, is this the Transylvania Station?” The youth replies, “Jah, Jah, track 29. Can I give you a shine?” The fog is armpit deep as the doctor lugs his baggage toward the station where he is met by a man dressed in a grim reaper-like black hood. It’s Igor, the doctor’s assistant, a hunchback with a hatchet blade for a nose and google eyes. “You must be Igor,” says the doctor. “It’s pronounced ‘eye-gore,'” replies the hunchback (Marty Feldman). “You know, I’m a rather brilliant surgeon. Perhaps I can help you with that hump,” offers the kindly doctor. “What hump?” replies Igor.