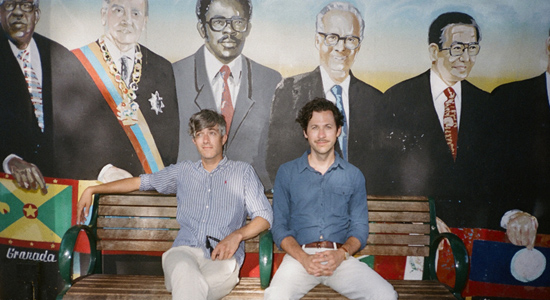 We Are Scientists—the duo of vocalist/guitarist Keith Murray and bassist/vocalist Chris Cain—are known for the oblique humor and intelligence that they bring to their music, but a question about their sharp mental acuity produces gales of laughter.

“I don’t believe brains or wit are particularly helpful, or necessary, in pop music,” Murray says, still chuckling. “If we intended our appeal to be narrow and excessively insular, those qualities might be good for us, but nobody likes a smartass.”

“Pop is designed to appeal to a broad spectrum of the population,” says Cain. “It must, by definition, bridge a lot of intellectual and humorous demographics. You want to tap into the collective unconscious and channel it. A finicky intellectual approach probably isn’t productive. A small portion of the public may like you very well, but large numbers of people will be put off.”

Despite their protestations, the songs on the band’s new LP, TV En Français (Dine Alone), are brimming over with wry humor and skewed insights into the state of modern romance.

“This is an album of love songs,” says Cain, explaining the record’s cryptic title. “But they’re more about how the communication, or lack thereof, affects the romantic part of a relationship. Two people can talk in a superficial way and miss a lot of the nuances you need to get along. It’s like watching a French TV program if you don’t speak French. You have an idea of what’s going on, but you’re missing important details when you don’t speak the same language. We’re also hoping the title will be helpful in getting us a couple of dates in France on our next tour.”

TV En Français was recorded with the help of producer Chris Coady (Yeah Yeah Yeahs, TV On The Radio), who helped give the album a polished, expansive sound. “We spent months agonizing about turning the reins over to Chris,” says Cain. “The work he does with bands like Grizzly Bear has a hyper cool attitude. We’re pretty damn cool, but we’re not hyper cool, so having him vibe so strongly with our songs was great.”

“His real gift is hearing the songs you bring him and letting you know how amazing they can sound,” says Murray. “We told him what we wanted to do and knew he had his finger poised over the cool cred button.”

Murray and Cain went into the studio with longtime drummer Andy Burrows and cut the album’s basic tracks live as a trio. “All three of us were in a room playing together, with the goal of getting the drum sound as perfect as possible,” says Cain. “We played as a band, minus the vocals. Once we got the drums down, we listened to see if our parts were usable, and most of them were.”

The rest of the sonic textures and keyboards were then added to the mix. “Chris played the padded sounds that give the album its depth,” says Murray. “The three of us supplied the keyboard parts.”

“We decided who’d play the keys by how difficult the part was,” says Cain. “I’d play the easy parts, Keith would play the harder parts, and if it required a real pianist, Andy stepped in.”

The music on TV En Français occupies a huge sonic space, and features the band showing off the diversity of its musical palette with arrangements that include touches of reggae, disco, R&B and punk. “We don’t really plan things out or talk about arranging too much,” says Murray. “There is an aspect of weird, organic hanging-out as we work on the songs. We played some of them on a quick tour of Europe we did, but we don’t plot out the orchestration.”

“We bring out the finer elements and the feel of the songs as a band,” says Cain. “They all begin with Keith making demos and sending them to me and Andy. He sent us about a thousand songs (in the last couple of years), and we whittle ’em down when we practice or when we’re hanging around in the tour bus on the road. With a wet bar, of course.”

The band’s energetic approach is refreshing, especially on “Slow Down,” a rocker taken at a blistering tempo. “We don’t vibe with the sluggish songs that seem to be in fashion,” says Murray. “The world seems to want to go to sleep, but not us.”

“A lot of people are keen on slow, melancholic tunes,” says Cain. “Rock has always flirted with death and self-destruction in an exciting, arousing way. These days, a lot of bands are caught in a love-locked stare at death that I find very depressing.”

Throughout its long and checkered career, We Are Scientists have gained a sizable following in their home country, but they’re genuine rock stars in England and Europe.

“You can’t argue with good taste,” says Murray. “Radio in Europe is more expansive. They’re always interested in playing interesting, off-the-grid music. Not that we’re avant-garde or anything, but over there you can get on the radio even if you’re not on a major label.”

“I think they like us because it’s an older and more sophisticated musical culture,” says Cain. “They’ve honed their preferences over the centuries. America is like a three-year-old with an appreciation for everything, but lacking the ability to pay attention to anything for an extended period of time.”