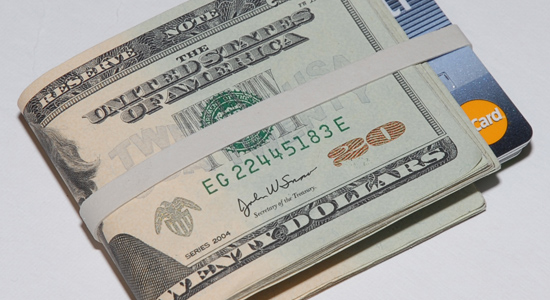 Cain: The Rubber Band Wallet is just what it sounds like: a rubber band you use as a wallet. For a while, several years ago, the Duct Tape Wallet was all the rage. And sure, we dipped a toe into that hand-fashioned river. But it ran its course, because it was flawed, and here’s how: The attraction was to the simplicity, to the single ingredient, one not normally destined for as lofty a station as “container of valuables”—this was a material closely associated with plumbing and brutalist, stopgap repairs. But that “badass” quality was nullified by the complexity, the prissiness, of assembling one of these things. Getting the edges all squared away and eliminating the sticky surfaces, this took time, and quite a bit of dainty care. It was a distinctly anti-MacGyver deployment of that manly adhesive, as was apparent to anyone who caught sight of one. So your discomfort as a maker/user couldn’t even remain private, and that was the real nail in the Duct Tape Wallet’s wallet-coffin.

Choosing the perfect rubber band is up to you—we like the fat blue ones our New York Times gets delivered in. (A new wallet every day with your paper!) A longer band allows you to wrap your valuables once the short way and once the long way, like an old-fashioned parcel pulled from a cowboy’s (tiny) saddle bag. (You may feel more secure using a double-wrap initially, but you’ll come to realize it’s unnecessary: in two or three years of Rubber Band Wallet use, nothing’s ever slipped out of ours—even receipts and drink tickets manage to keep a hold.)

All the really good, useful tricks are way too simple to be described in an instructional YouTube video. Ever notice that?