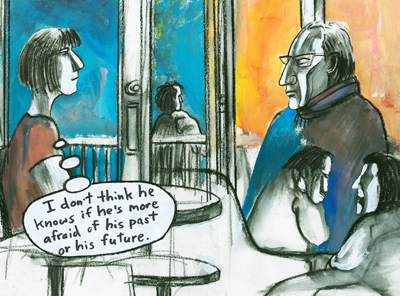 Excerpt from Obliterating History – a guitar making mystery, domination and submission in a small town garage, a novel by Jean Smith

Gordon can never think of any good titles for his paintings, while Frank has a seemingly endless supply to offer. Maybe it isn’t the actual title per se, thinks Gordon. Maybe he just likes how Frank sees his work. To Gordon, they’re decorative panels, but the gallery staff implores him not to say that. Ever. When potential clients ask about his paintings, they want to know what the paintings represent, what they mean. They wonder if they are supposed to be able to see something in them. Find something. These are the clients Gordon steers clear of at his openings. The ones twisting their heads sideways, both ways, back and forth, all around, trying to find something, while practicing the art of not spilling their drink. There is a lot of sideways head twisting at Gordon’s openings and it makes him nervous, his Hathaway shirt damp under his black suit jacket.

When cornered by gallery staff and herded over to a sale-in-progress to be introduced to a buyer, Gordon, for once in his life, has nothing to say until he can covertly lean in to read the card mounted on the wall, and then, with great theatrical emphasis, he tells the buyer that it’s called Orange Path To Pink Sea or A Dotted Line Divides Them or My Sister is a Big Baby, and while the painting is being reconsidered based on a few words, Gordon slips back to the bar to order another martini and loosen his tie. No one except Gordon and Julia know that a five year old kid is making up the titles.