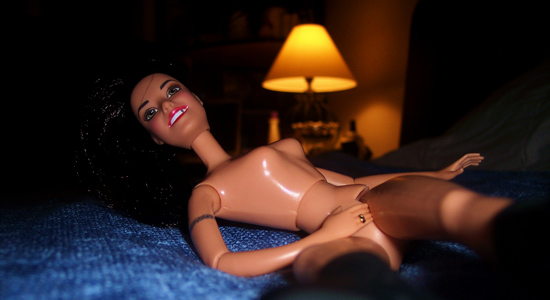 For devices, few things rival that age-old prohibitor of joy, the chastity belt. A bit of history: Contrary to popular belief, the chastity belt was invented by a Parisian constable during that ignominious period in France’s past when genital theft had grown rampant. Yes, genital theft. Initially, therefore, what we today know as a chastity belt was called, after its function, a “sanctity belt.” As criminals trended from genital theft toward less messy conspiracies, the sanctity belt was repurposed by overbearing parents worldwide who hoped to safeguard their daughters’ virginity until marriage. As we now know, this simply caused a genetic preference in our species for men with snaky, flexible penises that can turn corners before penetrating — nothing could be more obvious or expected to the modern eye, but in those dark early years it was as miraculous and sought-after an appendage as ever mutated its way into existence.

Of course, chastity belts remain wonderful impediments to self-stimulation, and you should by all means employ one if your wardrobe will allow it. A more subtle addition to one’s “look,” in case you’re picky about that sort of thing, is a good tight pair of sandpaper gloves. They are equally restrictive for the would-be onanist, come in a range of earthy hues, and alter one’s silhouette barely at all.

Perhaps, though, you are a professional gymnast or stage actor, or work at a chain restaurant, and aren’t in a position to choose your clothing. In that case, it’s your behavior that must change. Fortunately, with just a few strategic nips and tucks, your proclivity for prick paddling (or clitoris coddling) can be stemmed:

• Don’t watch pornographic video, look at pornographic pictures or dwell on lascivious thoughts. Do not watch the final act (roughly the last third) of films or plays—this portion often proves too fulfilling, in a way that can push the mind to thoughts of sex. For obvious reasons, do not cradle warm, bunless hotdogs in your naked hand.

• Abandon immediately any conversation in which one of the following topics arises: rocketry, fur, hot springs, weaving, rowing, poetry, length or irrigation. Never apply lotions of any kind, even to inanimate objects. When using coins, which is inevitable, cast from your mind the fact that they have “heads” and “tails,” and never pay by placing them into slots. Avoid furnishings with leather or upholstered surfaces; the furniture in your home should be made exclusively from plastic.

• Don’t caress porcelain. Don’t think about tigers or deer. Look away from precipices and curvatures; use horizons only as reference points.

• Do not stand so close to another person that you can feel his or her breath. If you find yourself in a crowded bar and feeling the breath of others, pull your coat over your head and stumble to the exit. Do not go to bars.

• Do not use sensual fonts, like those with serifs. Read only text written in “cartoon” fonts. If you must read something written in a sensual font, such as the news or a book, have it retyped first in a cartoon font.

• Only pet dead animals. Avoid desserts; an exception can be made for desserts speckled with bits of hard candy. Do not sit in, discuss or for that matter think about hot tubs.

• Finally—it’s a small thing, but can make a world of difference—refuse under any circumstances to get into a bed, alone or, needless to say, with company. Sleep sitting in a chair or lying on the floor. Use a blanket only when strictly necessary for survival.

And there you have it! Thousands of years of knowledge, distilled and laid at your fingertips. Scrupulous adherence to these precepts will liberate your flesh and mind from the yoke of sexual ardor. The burden cast off, your energies may be redirected toward whichever cause you deem worthy. Good luck! And remember: all things in moderation! It is still fine to jack off once or twice a day.