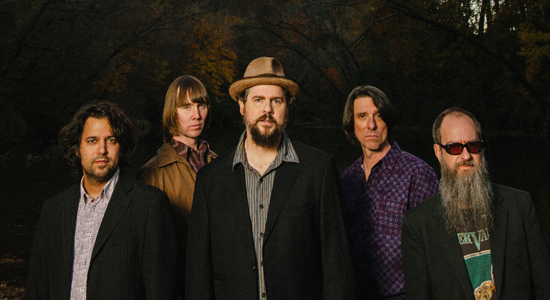 “I kinda have to make myself do it,” says Cooley, a founding member of the band. “I get to that point of just going, ‘Come up with something. Don’t worry about if it sucks—get something out there. Now do it again, do it again, do it again.’ When I finally get a good line that I’m sitting on for weeks, it eventually comes to the point where I’m like, ‘Now write the next one. Do it today, do it right now, don’t get up … I have to stay on my own ass.”

A hearty chortle flows down the phone as Cooley reflects on what exactly it took to get him back in the flow of writing for the Truckers’ 12th album, English Oceans (ATO). This is Cooley’s return to full-on songwriting—splitting the tracklist right down the middle after letting bandmate Patterson Hood steer the ship for the two albums prior—and is a return to form for the group as a whole. While DBT has never been a band to slack on the road or in the studio, English Oceans has the vigor and exuberance that made it one of America’s best rock groups. But that vigor didn’t come without effort.

And yet, despite all the forced motivation, English Oceans doesn’t sound like work—this is a record that feels as effortless and relaxed as afternoon at the beach. After 12 albums and almost two decades in existence, the Truckers manage to sound like fresh-faced kids, even while their songwriting becomes more mature, literate, evocative. Cooley’s return to full-time songwriting has invigorated the band in substantial ways, restoring a balance that had been lacking on The Big To Do and Go-Go Boots.

“It was a bummer for me,” he says. “I enjoyed the process and I like both of those albums a lot, but not coming in with new stuff when you’re used to doing that just hurts. Luckily, I’ve got enough songs that I can keep playing my greatest hits—whatever the hell that is—to this audience as long as they want to hear it. But is that it? You forget sometimes that there’s work involved. You get so caught up in the inspirational aspect of it, you think that that’s just going to be there, and it’s supposed to be there; and if it’s not there, it’s not going to be any good. That’s half true … maybe not even half true. You’ve got to do the work, and sometimes you’ve got to relearn how to do it—whatever the process was last time you had a creative moment, but (it may) have been just for that moment and you might not get another one.”

The Truckers have full license to mail it in at this point—their fan base is as loyal they come, one of the most reliable and enthusiastic in all of rock ‘n’ roll, willing to stick with the band through ebbs low and high. But that loyalty also goes both ways, and for Cooley, the need to give the fans the same level of quality is just as important. Also, just to make things more complicated, there’s a need to write songs that don’t just satisfy ravenous fans’ expectations, but the artistic needs of their author while progressing the group as an entity. It’s a balancing act that can be much more work than just cranking out the same old thing.

The Truckers back that philosophy up as well. On tracks like “Shit Shots Count” (arguably the most accurate portrayal of working a shit job for way too long that you’ll hear all year) or the galloping, Morricone-channeling “Made Up English Oceans,” you can hear the joy of creation. Even morbid character sketches like “When Walter Went Crazy” or “Til He’s Dead Or Rises” (the first time in the band’s career Cooley has sung a song penned by Hood) bristle with the energy of an outfit deep into its own groove.

The one track that doesn’t have an undertow of excitement is “Grand Canyon,” their tribute to longtime crew member and friend Craig Lieske, who passed away in January 2013. He was a familiar face to anyone who had ever visited the Truckers’ merch table, and his passing was a major blow to the DBT community. “Grand Canyon” is a sprawling, heart-wrenching tribute that evolves from maudlin waltz to gorgeously atmospheric space meditation. It’s seven minutes of true sadness and longing that captures the shiftless, floating feeling of losing someone you love.

“When you do this for a living and you start getting older and you’re practicing with your band and playing the gig … all that was great fun and it still is,” says Cooley. “But you get caught up in this ‘I’m a professional musician and I’m an artist now, and people expect this out of me.’ And you’ve got to go, ‘Fuck that, go play.’”