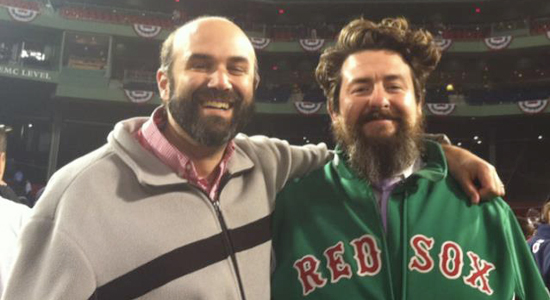 Kantor: I feel very fortunate to have a fun and interesting job. Because it’s fun and interesting (and also unusual and semi-public), I get a lot of questions about it. These are the ones that are most frequently asked, along with (what I hope are informative) answers:

Q: Fenway Park still has live organ music at every game?
A: Yes!

Q: How long have you been the Fenway Park organist?
A: This is my 12th season.

Q: Do you get nervous playing with so many people listening?
A: On the first day, I was very nervous. Since then, hardly ever.

Q: How did you get the job?
A: I was recommended for the audition. After that, it was a combination of being good enough and lucky enough.

Q: Do you also have another job?
A: Yes, I work at a music library, and I play a lot of club shows and recording sessions.

Q: Do you hang out with the Red Sox players?
A: No. I’ve had very brief, pleasant encounters with a few of them. The only player I can remember having a conversation with is former relief pitcher Lenny DiNardo; we talked about our shared admiration of the Pixies.

Q: Do you read sheet music?
A: Not well. I mostly play by ear and by memory.

Q: How many songs do you know how to play?
A: Probably several hundred that are popular enough for a ballgame and ready at a moment’s notice. I try to learn new songs regularly, but sometimes I forget an old one along the way.

Q: Do they ever show you on the Jumbotron?
A: It’s been done a handful of times, but my colleagues in the production department prefer when you call it the videoboard.

Q: How do you plan your setlist each night?
A: It’s almost entirely unplanned. The aim is to represent a variety of genres and eras while retaining enough flexibility to be able to respond organically to circumstances.

Q: What’s your favorite song to play?
A: The answer to this question changes almost daily. Anything that results in people singing along is especially exciting.

Q: Don’t you wish Fenway would get rid of all that annoying recorded music?
A: Not at all! The work that the Fenway DJ (TJ Connelly) does adds so much quality to the proceedings.

Q: How do you know when to play?
A: I watch the game closely and talk almost constantly via headset with TJ the DJ and also with hard-working production staff who coordinate video and scoreboard content.

Q: What’s the tenor of the headset conversations?
A: Everyone on headset (the aforementioned production staff) is working to make sure that we send and receive all necessary cues, instructions and questions to each other. The pace of baseball sometimes allows us to pepper the communications with silly jokes to keep everyone relaxed yet alert.

Q: Do you get sick of playing “Take Me Out To The Ballgame” every night?
A: I don’t expect ever to tire of leading a 38,000-person sing-along.

Q: Where is the organ physically located?
A: It’s had six different locations during my 12-year tenure; it’s currently in the State Street Pavilion Club on Level 4 of the ballpark behind home plate.

Q: What is a typical game like for you?
A: I arrive two hours before the game starts and get a quick bite in the staff/media cafeteria. I go over some notes from the previous game and the upcoming game with TJ the DJ and other production staff. Roughly 90 minutes before the game starts, I play a medley of pop hits for about 45 minutes while the early-bird fans are arriving. I then prepare for the pre-game ceremonies by going over pertinent notes. During the ceremonies, I play a variety of fanfares and flourishes and maybe an occasional song. I play at times throughout the game as appropriate and discuss cues frequently with TJ and other crew. I chat with fans in person and respond to Twitter requests as time allows. I play for a few minutes after the game ends as the crowd files out.

Q: Do you also play organ for the Boston Bruins hockey games?
A: No, those duties are brilliantly handled by the talented and friendly Ron Poster, though I subbed for him a couple of times during the 2010-2011 season, and that year the Bruins won their first Stanley Cup championship in 39 years; make of that what you will.

Q: Will you babysit my kid while I watch the game?
A: This is not a frequently asked question, but it once was an asked question.

Q: Did you know the Red Sox first organist, John Kiley, who played for the team from 1953-1989 and also played for the Bruins and Celtics?
A: No, but I’m a huge fan of his work.

Q: All-star shortstop Rico Petrocelli played drums on John Kiley’s 1966 Red Sox Organ Music album. Which current Sox player would you like to have as your drummer?
A: Whoever would want to do it is fine with me. Petrocelli once approached me at a game and asked if I’d heard Kiley’s album; maybe that was his subtle way of asking to play with me.

Q: Is it true that you recorded on the Fenway organ for American Idol last year?
A: Yes, but I don’t know if they ended up using it.

Q: Are you the only ballpark organist who includes indie-rock songs in your selections?
A: I don’t know.

Q: In the last 95 years, the Red Sox greatest period of success has come during your tenure with the team. How much credit do you deserve for that?
A: You may draw whatever conclusions you wish, but I think you’re confusing me with David Ortiz.