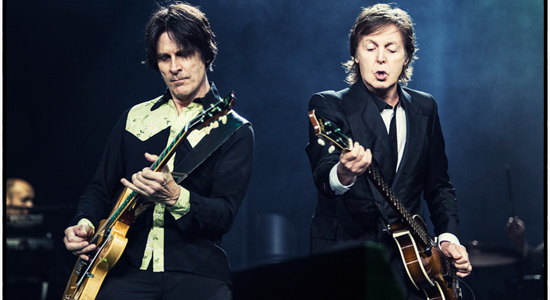 Parker: Macca gets a lot of shit. OK, he did write a few Beatles songs that I skip on my less charitable days, but he’s fucking Paul McCartney. On his bass playing alone, he should get a pass. A big pass. But for some stupid reason (Beatle management?) the whole “who’s your favorite Beatle?” question exists to this day. Whatever. I love them all and George Martin. My folks had all the records when I was growing up until our house got robbed. Not only did the thieves make off with the stereo, but they took all the good records, too (Sgt Peppers was on the turntable). BOTR came out in 1973. I was too young to remember the release, but it seeped into my subconscious at an early age. I’ve gone back to it in recent years and, well, it’s like comfort food. There’s a beauty and wistfulness to the whole thing along with a kind of smeared, handmade quality. Macca recorded the basics in Nigeria. He played the drums and a lot of the other stuff (of course, he played the bass, out of tune though it may be in parts). They flew back with the master tapes and finished it in London. Yes, I love Plastic Ono Band, and I love Band On The Run.