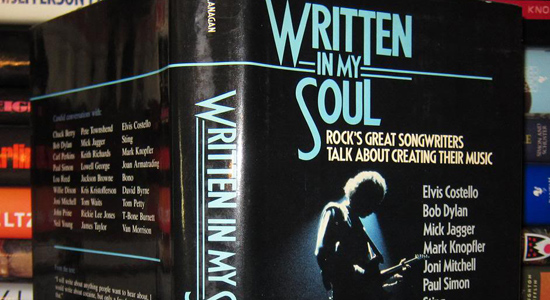 Parker: I had a few years of saxophone lessons when I was in elementary school and some drum lessons later on, but on guitar and songwriting, I’m self taught. It can be a kind of lonely and mysterious road. I love it, but sometimes you’re out wandering in the dark wondering what the hell you’re trying to do and how to do it. I discovered Written In My Soul by Bill Flanagan after I had been writing for a little while. The book is a collection of interviews with many of the great songwriters from the ’60s to the ’80s: Dylan, Young, Mitchell, Jagger & Richards, Waits, Cohen, Costello, Petty, etc. It was reassuring to see that there are shared experiences in the writing. Many things that other writers expressed were things that I had thought and gone through, even at my formative stages. It was also interesting to read about the different ways people worked and thought about the process. I still pick up the book sometimes and read random parts of interviews.