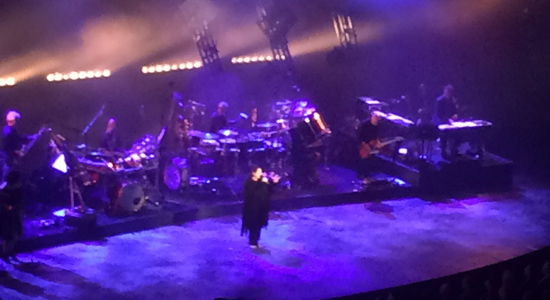 Long before there was Björk, Cocteau Twins, Tori Amos or Bat For Lashes, there was Kate Bush. For the uninitiated, Bush has fashioned a four-decade career as a true musical original—a bloody-minded British eccentric right out of the Syd Barrett/Monty Python/Julian Cope handbook, hell-bent on pursuing her own muse to the exclusion of nearly everything else going on around her, pop or otherwise. Back in the day, Bush objected to being objectified (criticizing her record label for marketing her as “a female body … rather than an artist in a female body”) and was the first woman to pen her own U.K. number-one hit (“Wuthering Heights”), winning her a fanbase that came to include artists as diverse as Johnny Rotten, Tricky, Outkast’s Big Boi and Rufus Wainwright. To put it in modern terms: Kate Bush is a pop/rock OG, equal parts King Crimson (prog) and David Bowie (glam/wave), with a back catalog to rival that of anyone making music over the past 50 years.

Somehow, along the way, Bush had managed to stay mostly out of the live performance business since 1979 before announcing a spate of shows in London entitled “Before The Dawn.” This news encouraged an enthused (mostly) British public to promptly purchase more than 77,000 tickets in a mere 15 minutes to a series of 22 consecutive gigs at the Eventim Apollo (the Artist Formerly Known as Hammersmith Odeon), with ticket prices on the black market fetching nearly 2000 GBP. The fact that Bush’s last proper tour took place in spring of 1979—and that rumors had since made the rounds of a crippling fear of flying, the almost manic need for Bush to control every aspect of her career, or that the death of her lighting engineer at one of her gigs had severely affected her ability or desire to play live again (with the benefit for the family subsequently scheduled for the very same venue she was playing this evening)—has only generated the sort of anticipation that one associates with An Event, A Moment, a Bucketlist Item.

Tonight’s show was only the second of these gigs, so the wide-eyed wonder of seeing an artist both remarkably ahead of her time and so famously reclusive hadn’t yet worn off, with news crews wandering around in front of the venue interviewing fans, hangers-on and those who (like me) had traveled long distances to catch one of these shows while Bush was still in the mood to perform. And perform, she did—a three-hour set in which an energized Bush recreated the second side of her 1985 classic LP Hounds Of Love (the so-called “Ninth Wave” suite) and the second side of her 1993 album Aerial (the “Sky Of Honey” cycle) as separately imagined stage productions, with sets, costumes and lighting effects more akin to a West End play than a rock ‘n’ roll show. Bush’s vocal gift is an instrument neither ravaged by time nor age; her airy soprano soared as high tonight as it ever has, sure in pitch and rich in power. A devastating weapon perfectly deployed against a wide-ranging arsenal of material.

(Bush, via her website, had made an explicit request for tonight’s audience to “please refrain from taking photos or filming during the shows; I want very much to have contact with you as an audience not with iPhone or iPads or cameras” … Hence, the lousy picture accompanying this review. Normally, I would do better. But as it happens, when a British audience is asked to do something, and they love the person who asks them to do it, they comply fully and passionately—I wasn’t about to be the one person in the theater tonight kicked out or made a social pariah for abusing the rules … sorry, ya’ll).

Her performance kicked off with the voice of Miranda Richardson, from Bush’s 1993 album The Red Shoes, reading from the Sanskrit hymn Gayatri Mantra: “O Thou who gives sustenance to the universe, from Whom all things proceed, to whom all things return, unveil to us the face of the true spiritual sun hidden by a disc of golden light, that we may know the Truth and do our whole duty as we journey to thy sacred feet … ” And from the darkness of the stage marched Bush with her backup chorus in a line behind her, working her way through a series of old favorites (“Hounds Of Love” and “Running Up That Hill,” which to my ears remains one of the best songs ever written by anyone in any era) before closing out the final line to “King Of The Mountain” in a shower of confetti before segueing into a stage set approximating the watery shipwreck of “The Ninth Wave,” a harrowing, emotional journey populated by a psychedelic cast including dancers dressed as fish skeletons, seafarers in orange life jackets and Bush flipping between live appearance and filmed screen sequences (having spent three days in a flotation tank capturing these bits in partnership with Adrian Noble, the former artistic director of the Royal Shakespeare Company, whose last night with the troupe was evidently this evening and was therefore given a warm sendoff by Bush at the break). The overall effect was somewhat akin to an acid trip—not unpleasant at all, but disorienting and jarring in parts, such as one scene in which an overhead lighting apparatus was made to stand in for a search-and-rescue helicopter, frantically seeking Bush’s drowning female character beneath the waves as her family is rescued in the meantime. At one point, the ghost of Bush repeatedly sang “I’m not here” to her family (Bush’s real-life son, Bertie McIntosh, featured heavily throughout the evening) and to the audience, seemingly taunting all concerned by pointedly stepping out of the narrative to remind us of her lengthy absence.

Following a raucous standing ovation and subsequent 20-minute intermission, the altogether different “Sky Of Honey” suite began, connecting birds and their seeming symmetry to light (up at dawn, asleep at dusk) to a 19th-century painter whose work goes maddeningly unfinished over the course of its 10 “movements” but nonetheless ends on an altogether more uplifting, life-affirming note—with Bush and McIntosh lifting off in flight as the suite closed, to dazzling effect. Between the costuming, imaginative use of puppetry and special effects, the suite far exceeded the limits it had been assigned on record, and Bush seemed genuinely moved by the rowdy, passionate reception given to her performance. So much so, that by the time she had returned for the encores—accompanying herself on piano for the remarkable “Among Angels” before bringing the band back for the crowd-favorite “Cloudbusting”—she was dancing barefoot in twirling circles with the audience doing its level best to imitate this step, in place, in their seats.

By any rational measure, 35 years seems entirely too long to wait to see live music performed by an artist who is so obviously among the most influential and important of the past two generations. I mean, entire lives can be altered and worlds can be rocked off their rotational axes over the course of that period of time. And yet—as I sit here attempting to describe for you the sheer joy I experienced watching Bush bring her music to life for an audience who, equally as clearly, could imagine doing nothing else but take it in, in rapt attention, for 180 straight minutes—it seems an entirely rational turn of events. Dearest Kate—let’s try not to wait so long, next time. We missed you too much. There is simply too much “there,” there.